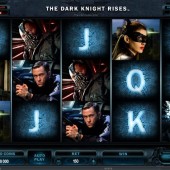 Following a growing trend in the slot game industry of movie related titles is the latest release from slot developer Microgaming – The Dark Knight Rises. It is the sequel to the incredibly popular slot The Dark Knight, which came out in 2012. There is an instantly obvious difference in The Dark Knight Rises slot, which is that it does not come with any sort of progressive jackpot. However it is absolutely packed with features, bonuses, in-game battles and more.

If you have seen the film, which I am sure most of you have, then you realize that most of the characters from the motion picture appear on the reels. In some cases they play an extra part, for example Bane and Batman are brawling to win you free spins and multipliers in one feature.

The free spins game in The Dark Knight Rises slot is very interesting, as there are four options to choose from. It is activated by 3 or more scatters appearing anywhere on screen. You can choose Super Stacked Wilds, which can appear on multiple reels in the same spin. Rolling Reels – a feature very similar to tumbling reels for those of you who have played Net Ent’s legendary Gonzo’s Quest. There are also Heat Seeking Wilds, which are delivered by Batman in flight mode. The chosen symbol is then turned into a split wild, offering double the winning possibilities. Lastly there is the Extra Wild Blast, creating extra wilds on screen from your chosen character. Personally I prefer the Super Stacked Wilds, as you can really hit some big wins when you get 2 or more stacked wild reels. However, some of these free spins bonuses need to be unlocked, which is done by playing the game regularly – the same as in slots like Thunder Struck 2 or the sci-fi-themed Battlestar Galactica.

During regular play there is also a number of winning features built into the game. If a wild appears on the middle reel then it will instantly expand across the whole reel. There is also a new feature, which I have not seen before called Symbol Scramble, which picks up all the symbols and places them in a new position on the reels. It sometimes leads to more winning possibilities.

Having played The Dark Knight Rises for several hours I can say that I have mixed feeling about it. The graphics, features and sounds are amazing, there is no doubting that. However, the low volatility of this slot and the lack of jackpot makes me more inclined to play its predecessor.