Titans of the Sun – Hyperion slot 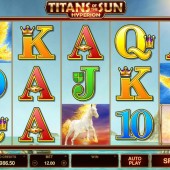 The developers at Microgaming have earned themselves a reputation for being a bit lazy outside of their big budget branded slots. You only need to spend five minutes perusing the software developer's back catalogue of mediocre slots to see exactly why. Unfortunately, old habits die hard and this Titans of the Sun – Hyperion slot is just another example of this laziness.

Titans of the Sun - In Two Parts!

Titans of the Sun – Hyperion is a 5 reel, 15 payline slot that was released in sync with Titans of the Sun – Theia. Consider it as a sort of his and hers slot combination based on the Greek Gods Hyperion and Theia, except they are very much the same slot. Disappointing to see from Microgaming.

Hyperion - The God, the Myth, the Legend

For those of you not in the know, Hyperion was one of twelve Titan children of Gaia (the Earth) and Uranus (the sky). The legend tells that Hyperion helped to overthrow his own mother and was then later overthrown by the Olympians. The sister slot to this game is based on his wife Theia... who also happened to be his sister. Urgh, weird.

Anyway, the symbols for this slot are not particularly creative. There is Hyperion himself, a fiery horse, a fiery bird of prey, and the regular 10-through-to-Ace symbols that fill up the remaining positions on the reels.

The Titans of the Sun logo is the Wild on this slot. It can pay out 5,000 coins at a maximum and has the ability to substitute for all other symbols, except for the Scatters, to complete winning combinations.

This game also comes with Stacked Mystery Symbols. This pretty much does what it says on the tin. The Mystery Symbols are represented by a golden sun icon and when they land on the reels they will split to reveal a random symbol that will be stacked. In the base game, the symbols it can reveal are any except the Wilds. However, in the free spins bonus round, even the Wilds can be revealed.

Titans of the Sun – Hyperion feels like half of a two part slot that really should have been combined to make one slot. The story of Hyperion and Theia is really one single tale in Greek mythology so it just feels that Microgaming is milking it. You can win 75,000 coins as a maximum jackpot which isn't bad but during my time playing this it felt like it was the same old, same old from Microgaming with repeated small wins that simply nullify your betting and makes you feel like you're never getting anywhere. Greek mythology is always a good basis for a theme but Microgaming have wasted it here. Spend your time more wisely by checking out some proper Greek mythology-themed slots like the high profile Zeus 1000 slot by WMS Gaming instead.