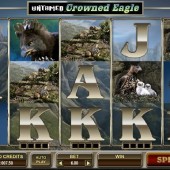 Judging by slot developer Microgaming’s slot releases there’s a lot of untamed animals out there! As if having an exotic Untamed Bengal Tiger slot and also releasing an Untamed Giant Panda slot didn’t have us all concerned enough they have now released an Untamed Crowned Eagle slot!

Asides from the fact that I’m still receiving therapy after Microgaming tainted by naive perception of giant pandas as these lovely cuddly bears that will hug me until I fall asleep, I am actually pleased to see another title released from the Untamed series. The features are always riveting and even though they do follow a trend it is a formula that works and Microgaming have seen sense to not fix something that isn't broken.

Untamed Crowned Eagle is a 5 reel, 243 ways to win slot that holds a lot of similarities to its predecessors in the Untamed slots series. The symbols across the reels focus on different Crowned Eagles in various positions of flight and action. There’s even a set of baby Crowned Eagles looking all cute and adorable. The reels are also set against the stunning backdrop of a mountain landscape, the natural habitat of the Crowned Eagle (doing my best David Attenborough impression there).

Collect a Wild is Back!

The Collect a Wild Bonus makes another appearance after being a successful inclusion on the previous Untamed slots. As per the previous releases, there are four spaces beneath the reels and every time you hit a Wild, represented by the slot’s logo, on the reels you will fill one of those four spaces with a Wild symbol. Once the fourth Wild has been collected that Wild will turn the entire reel Wild and you will be rewarded with 4 re-spins with that Wild reel freezing for the entire 4 re-spins.

There is also a free spins bonus round on this slot for you to trigger. You must hit at least three of the Eagle’s Eye Scatters across the reels in order to trigger the free spins. You will receive at least 10 free spins with a 3x multiplier being awarded to all wins achieved during the free spins.

Untamed Crowned Eagle is pretty much more of the same from Microgaming regarding the Untamed slots series. On the plus side, you know what you’re getting. On the down side, it’s nothing new and it feels like they’ve just changed the animal and made no effort to alter the features. Still, I’m a big fan of this series, even though this release is almost a replica of the Untamed Wolf Pack slot, and I’m happy to see another title added to the collection.