Yggdrasil – The Tree of Life slot 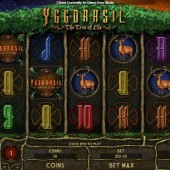 Ok, so if you were not familiar with the legend behind Yggdrasil, it is from Norse mythology and is a tree that it is believed connects to the nine worlds that exist in Norse cosmology.

This slot takes that immaculate tree and builds a decent game around it with the tree playing a key role in the set up of the reels in this 5 reel, 25 pay-line slot. The reels are the actual tree on this slot with the leaves sprouting out the top and each reel separated by a branch of the tree.

In Norse cosmology, it is said that the tree is very holy and that the Gods go to it every day to tend to their duties and that creatures live within the tree. Some of these creatures make up the symbols on the reels including deer, squirrels, snakes and birds. There are also the regular 9 through to Ace symbols.

Look Out for the Fierce Warrior Wild!

The Wild symbol is represented by a fierce looking warrior and this symbol substitutes for all other symbols except for the Scatters across the reels to complete winning combinations and give you the chance to earn some big pay outs.

This is a fairly simple slot to get to grips with due to the presence of only one bonus feature. The bonus feature is decent for pay outs but the fact there’s no real difference between the three levels left me feeling like they just could have combined all three levels into a massive single level.

Even with that criticism, this slot is more in the arena of the atmospheric The Dark Knight slot for entertainment purposes but could have done with more bonus features like the Orc vs Elf slot from RTG. Nonetheless, this is a slot not to be sniffed at and is a worthy addition to Microgaming’s online slots portfolio.