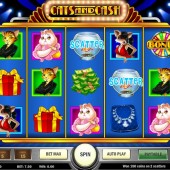 Let's face it - everyone loves cats (OK, maybe not the most hardcore of dog owners, but almost everyone).

And there's a fair chance that plenty of slots fans are cat lovers too. Just as well, then, that there are plenty of moggy-minded slots games doing the online rounds.

Slot developer Play 'n' Go are the latest developers to throw their catnip drops into the ring with this 5 reel, 15 pay-line slot where we're plunged into the middle a funky '70s-style disco with a difference. Instead of a budding John Travolta spinning his way across the reels is a very cheesy-looking cat in flares and open-shirt. Not so much the Bee Gees, more the Moggies.

Joining our crooning club singer on the reels are some sultry nightclub temptresses, piles of cash, gold bars, a diamond necklace, and a straight-looking club accountant. The Wild is the cheesy cat crooner; he subs for all symbols other than the Bonus and Scatter. Get five Wilds and you’ll be licking your paws at a 10,000-coin jackpot.

The Scatter, meanwhile, is the goldfish. Three or more will bag you a special prize, but it won't trigger any features. That honor falls to two other symbols, the Bonus icon and the Gift Parcel.

The Bonus icon triggers a straightforward Wheel of Fortune style game when hitting three across the reels. Choose 'Spin', then sit back and watch the wheel spin until it stops and you win a juicy prize. The second feature, meanwhile, is triggered by hitting three of those gifts on the reels. Essentially a 'Pick Me Bonus' feature, you'll be presented with a series of boxes, a la Deal or No Deal. Pick one to reveal your prize, anything from 10 to 10,000 coins. Just to rub it in if you only get 10 coins, the other boxes will be revealed one by one to show you what you missed out on.

As I said at the top of the review, there are plenty of cat treats online if you're into that kind of thing - IGT's online version of their popular live cats 'n' glamor slot, Kitty Glitter, and Jour de l'Amour, Viaden Gaming's romance-laden cat-themed slot are two decent examples - but for more disco treats I'll stick with Betsoft Gaming's superb 3D offering, At the Copa.