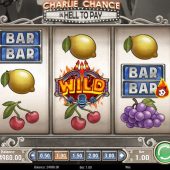 Charlie Chance in Hell To Pay slot by Play'n Go is another rustic cartoon theme like their last release Agent Destiny slot. We have Charlie as our cartoon man being tempted by an alluring female devil and some jaunty 1930's music as we play with the reels over a black and white background. So what chance is there we'll be adding some charlie to our bankroll here?

Like many successful games in the past including Play'n Go's Eye of The Kraken and Netent's latest release Gods of Gold Infinireels, we get just 3 reels here. Charlie Chance in Hell To Pay slot has 5 pay lines with single symbols which pay for their 3-of-a-kind wins Wild 8x bet, Bell 4x, 666 3x, Bars 2x with Grapes or Apple at 0.8x and finally Lemon or Cherries 0.4x. There is though far more to this slot than meets the eye! Wilds can display a 2x or 3x multiplier too.

Many symbols are overlaid with a small Female Red Devil. See 3 of them in view and you see Charlie walk along the front of the game and choose one of the feature discs as he goes.
Instant Prize - up to 10x your bet.
Multiplier - a re-spin awarded with either 2, 3 or 25x applied to the win, no win guaranteed.
Wild Re-spin - a spin with up to 9 more Wilds added to the reels.
Win Spin - the middle reel is Wild and third reel nudges until a win.
Free Spins - 8 free games and every 3 Devils you collect will make Charlie walk along the feature board and add 1 extra spin. You can get a re-trigger plus the other features as above too. Play'n Go tell us 6,666x is possible, through how I do not know!

Charlie Chance in Hell To Pay slot has a RTP of 96.23% and can drop some surprisingly big wins in during the base game which is jaunty and entertaining with the coloured reels offset against the monochrome background. The feature occur frequently although it's really the free spins you want. The Wilds are multiplicative so I suppose if had a full screen of 3x ones on a feature your payout would be quite good, but again the free spins is really where it's at here. Yes, I will give our Charlie another chance for sure...