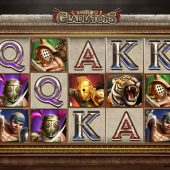 Game of Gladiators slot by Play'n Go joins an ever-growing list of games utilizing this timeless and classical theme, although like this game they nearly all have a Roman temple in the background and similar sound effects of clashing swords and roaring spectators. Not a problem because as with iSoftBet's Gladiators Go Wild and both the Playtech Gladiator slot along with Leander's Golden Rome, we are nearly always guaranteed some excitement when this subject is used. I can promise there's plenty of action in this gladiatorial arena, but can our bankroll survive the bloodletting?

The symbols won't come as much of a surprise on the 20-line Game of Gladiators slot with the Wild Tiger paying 25x bet for 5-of-a-kind, Scissor 20x, Provocator 15x, Murmillio and Retiarius both 10x. These are the four combatants here and the remaining symbols are four card values paying either 2.5 or 1x for a full line of 5. Scatters are in the form of a portcullis leading into the arena and are single unlike the Gladiators which can appear in stacks. With all this sparring going on, surely we'll have some pretty dramatic in-play features?

There are a few random or triggered Primus modifiers here on Game of Gladiators and some are quite good when they go nicely.

Net Attack - a Gladiator sticks in view and a respin is awarded.

Fame - A Gladiator is paid out according to the Free Spins awards table (see below).

This is the free games bonus triggered by portcullis scatters on reels 1,3 and 5. You choose from 2 modes, Spartacus or Amazonia to ensure two gender choices. Above the reels there is a row of 12 boxes with a skull on the left. Your warrior starts on the right and every time it appears in a spin he or she will have to do battle with the other gladiators on the grid. These opponents line up in the boxes and you can kill anything from 1 to 11 at a time, depending on how many have landed consecutively in those boxes. If your chosen warrior doesn't appear on a spin, nothing happens and wins are paid normally.

If the gladiators accumulate 12 or more without defeat, you hit the skull and the round finishes. There's no fixed number of spins. There is a pay table in the rules which gives fixed awards for the strings of consecutive similar gladiators you defeat, from 1 to 11. All 4 gladiators (or champions as the rules name them) will attack at least once. On their second attack their fixed values get a 2x multiplier and it's 3x on the third or subsequent attacks. You simply accumulate awards until you are defeated by being pushed back left and landing on the skull. This is a fun round to observe, and does usually produce a decent return - Play'n Go as usual on their games claim a victory of up to 5,000x bet is possible.

Game of Gladiators slot is hugely entertaining with some excellent sound effects, animations and scenes included in the graphics. By now we've learned to be a bit cynical about the 5,000x claims Play'n Go make but they do actually get hit on rare occasions and that aside, the bonus rarely disappoints and 3-figure returns won't be surprising at all. The base game is good too with the very frequent random modifiers to keep you involved and these can produce some medium sized wins themselves. You have a factory 96.34% RTP although this developer does provide lower versions to casinos which request them, so always check the rules where you play their games. If you're feeling brave, enter the arena here and do battle yourselves...