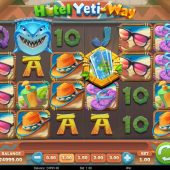 Hotel Yeti Way slot by Play'n Go has a weird theme, weird mechanic and equally daft sounds and animations but appears to be quite fun! We have a beach hut in the background, gentle calypso music and graphics to put you in the holiday mood, so we must assume any Yeti here is on a faraway vacation. There are some sharks here which also feature on Push Gaming's Razor Shark slot and 6 reels so are we getting yet another Raging Rhino type game here? For now though, can we hang on to our bankroll by these dangerous waters or will it end up a tropical trash can?

On the reels...
Stacked symbols, 6 reels of 4 rows and no pay lines means we have a 4096-way game in Hotel Yeti Way slot. Symbol pays are therefore low, with the Wild or Shark at 3x bet for 6-of-a-kind, Hat or Sunglasses 2x, Flip Flops or Sun Cream 1x and five card values all paying 0.5x for each full way. Map scatters appear on all reels but the Wilds mentioned above don't appear normally as they need the Yeti in his Hawaiian shirt to create them!

Yeti Wild Features
When the 2-row high Yeti symbols lands anywhere in view, it triggers one of 3 random Wild modifiers after turning Wild itself:
Bungee Jumping - can create 1-4 full Wild reels.
Surfing - adds 2-8 more Wilds in random positions.
Scuba Diving - awards up to 24 re-spins with Sharks held and other positions spinning, stopping on any miss.

Free Games
Three to 6 Map scatters awards 8 to 20 free games rising in multiples of 4 for each scatter over the 3. They can retrigger in the same numbers. Your modifier is the fact that 'Payway Multipliers' of 2x can appear on 1-6 reels so for example with one appearing, your ways would be 8192 instead of 4096, all six would mean 4096 x 64 or 262144-ways to win! You still get the Yeti Wild features but must choose the one you want before the spins start and that's what you get if and when it lands. Your win is capped at 30,000x stake apparently and the round is extremely volatile so expect some tiny totals.

Our View...
Despite it's ludicrous theme and graphics along with daft sounds and animations, I quite like the game for some reason. You can get the odd decent hit from the yeti Wild modifiers, in fact you rely on those heavily if the truth be told. The most volatile is the Scuba Diving one which could theoretically return a full screen of Sharks and Wilds for 12,288x bet. The RTP is 96.20% but it could be offered by casinos as low as 84.25% so always check by the way. Free games are quite involving when you watch the Payway multipliers in action and can land some decent totals. Maybe the Yeti we are so afraid of has come in from the cold this time...