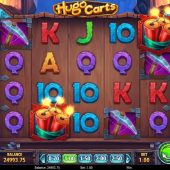 Hugo Carts slot by Play'n Go is the fourth in this lamentable series of Hugo-themed slots. Actually, the game mechanics aren't bad as we saw from the original Hugo slot which had a fairly prompt sequel Hugo 2 slot and to compound the misery we then saw a year or so later, Hugo's Adventure slot. Perhaps I'm being a bit unfair as apparently our annoying little Hugo was in fact a very popular children's TV cartoon in Scandinavia and who I am to complain, after all we had the Teletubbies! So he has now taken to mining with the tunnel behind the reels which are set in wooden props and we are treated to gentle music and Hugo's outbursts for the audio. So can we cart away a few gems for our bankroll here or will it be lost underground forever?

On the reels...
We have 1024-ways to win here on Hugo Carts slot which mean a grid of 5 reel each of 4 rows. Symbols can be stacked and the Nugget Wild is top pay at 10x bet for 5-of-a-kind, Helmet 3x, Lamp or Pick 2x, Shovel or Ace 1.5x with four more card values of either 1 or 0.5x. Dynamite scatters can appear on all 5 reels with occasionally a random Don Croco appearing to drop 2 scatters in as a head start! You do get 3 specific modifier symbols on the middle 3 reels as you would expect from Play'n Go:
Hugolina - he seems to have a girlfriend or sister now, she lands on reel 2 to add 2-5 symbol multipliers of 2-10x.
Hugo - he lands on reel 3 and drops in 2-5 Nugget Wilds.
Scylla - lands on reel 4, adds 5-9 mystery symbols.
You can't seem to get more than one modifier per spin.

Free Games
You will be granted 7 free spins for 3 Dynamite scatters, 9 for 4 and 11 for all 5. You will be randomly allocated one of the above 3 modifier characters to appear every free spin. Should you retrigger, then a second one will be selected. A second retrigger will activate the final symbol for the third tranche of free games and you cannot retrigger again after this.

Our View...
Hugo Carts slot has a gentle volatility and RTP of 96.25% but can be set as low as 84.23% so check your casino! Play'n Go don't scream at us here that we can win 10,000x bet for example which compounds my feeling that like Hugo himself, the game is annoying but harmless. You can get the odd reasonable hit via the modifier symbols and free spins aren't hard to trigger either. They don't often pay much though - like Hugo, this game is more about fun and games than tempting the seasoned slot player in for big hits...