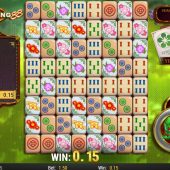 Mahjong 88 slot by Play'n Go joins their collection of grid-based cascade slots that began with Gemix and have been increased in number by Viking Runecraft and Moon Princess, being the most popular examples. As the name suggests the game is based on the old Chinese tile game of Mah Jong and features all the colourful tiles over a background which can change with the seasons from Spring through Winter. We get some very gentle music when in play along with very convincing sounds as those tiles drop or turn to reveal their pictures, so can our bankroll lost as long as this traditional game does?

To win on Mahjong 88 slot you require adjacent cluster of 4 or more similar tiles. Winning ones are replaced by them flipping over to reveal another symbol. The top pays are for 12 or more in a cluster of which the Purple flower pays 500x bet, Orange 250x, Yellow 100x and Pink 60x and the medium value tiles are 4,5 or 6 Bamboos all paying 20 with the lower values Wheels all paying 12x. There aren't any scatters or Wilds appearing naturally, but Wilds can be created as we'll discover.

You get random modifiers and these are different for each season which changes the background of your slot. You start in Spring and progress through Summer, Autumn and Winter. When the season changes randomly, you get a prize of 10% of all your winnings you had in the old season. The season modifiers are:

This little fellow sits to the right of the grid and if you clear 33 or more tiles on 1 spin, he will grant one of four benefits:

Croak - 1 symbol is randomly selected to be paid scattered.
Tongue - two edges are selected and all tiles between them transform to the same symbol
Spawn - one symbol set is chosen to be transformed into another symbol.
Hop - one symbol chosen which will destroy and transform its adjacent tiles.

If during the above process your total of symbols used increases from 33 to 88 or more, all subsequent wins have a 5x multiplier applied and you are Supercharged!

Mahjong 88 slot is a superb take on the theme with realistic tiles and sounds although the music can grind eventually. Eventually is an apt word as you'll spend a long time waiting to hit the 33-plus tile removals to trigger the Fortune Frog and in between wins over over 10x bet are rare. I played for 2 hours and never reached the Supecharged mode of 88-plus removals which is presumably where you would get a chance at the proclaimed 5000x bet maximum win. The RTP is 96.27% although Play'n Go provide different maths models so always check the game rules wherever you play their games. I like the game because I like Mah Jong itself, but if you don't this slot could well grind you down...