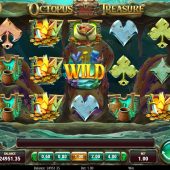 Octopus Treasure slot by Play'n Go continues their fascination with undersea life as we saw with the very good Eye of The Kraken slot. The graphics here are more on par with Mermaid's Diamonds slot though which too was a decent enough game. Their third sea themed game was Pearl Lagoon slot which I didn't rate as much as the previous two anyway. We have dramatic seafaring music here with an undersea world as the background to the transparent reels behind which lies a menacing octopus to complete the scene. So can our bankroll evade those eight troublesome tentacles and lift some treasure from the deep here?

You have 20 pay lines over 5 reels of 3 rows apiece and symbols appear singly or double-stacked on Octopus Treasure slot. The pays aren't huge, the 5-of-a-kinds begin with Wilds at 5x, Gold 3.5x, Vase 3x, Copper Coins 2.5x, Pottery 2x with four card suits from 2 down to 1x for a full line. You get Oyster scatters on the odd reels and Treasure Chests may land randomly on any reel for one of 4 modifiers:
Gold Pile - Octopus transforms symbols for bigger wins.
Treasure Grab - Octopus collects symbols for an instant cash prize.
Wild Coins - Pick coins to upgrade random symbols into Wilds.
Wild Reels - Pick pots to transform 1 to 5 reels into Wilds.
There can be a random multiplier appearing from the chest above reel 3 from 2 to 10x after any of these random features.

Having landed the Oysters on reels 1,3 and 5 you play a set of reels with only keys appearing on them or blanks. Spin until no more appear and that's the amount of free games you get. Each one will have a Treasure Chest modifier applied. You can land more Keys too which each add 1 spin, no limit. Win up to 5000x your bet, Play'n Go tell us as usual.

Octopus Treasure slot is pretty low in volatility with the now standard factory Play'n Go RTP of 96.20%, which can be far lower at the casino you play at. The features are regular if you consider the random modifiers, harder to get the free spins which to be fair are entertaining and usually pay well when you do get them. Looks, sounds and animations make the slot fun to play but it's pretty average fare overall. Maybe worth a quick scuba dive again in future...