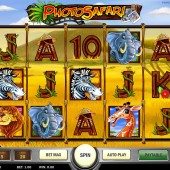 "Zulus – thousands of them!"

If that line evokes memories of Michael Caine fighting off the challenge of a hoard of south African tribesmen, then you’ll probably love this safari-themed 5 reel and 20 pay-line slot from no-nonsense developer, Play ‘n’ Go.

Giraffes, smiling elephants, lions and zebras, plus 10-through-Ace symbols draped in all sorts of tribe-related headgear, and a hunter’s hat: Play 'n' Go make the right choice in going for the fun safari rather than the up-its-own-arse variety here.

Local Zulus provide the Drum symbol for a wild icon. It substitutes for all regular symbols other than the Scatter. Three or more film reels, meanwhile - the game's Scatter - activates a free spins round, and the film then acts as a Wild during that round.

The key aim of this game is taking the best photos while on holiday. Three camera icons anywhere on the reels triggers the game’s other feature bonus, a fun Pick 'Em Bonus where you'll find yourself in front of a camera and required to take pictures of the wildlife on show. Depending on how the pictures have turned out and what you have managed to capture you will be rewarded with instant awards. Get some nice, smiling lion heads and you'll win big time; snap the zebra's backside, meanwhile, and you'll be looking at some distinctly smaller cash wins.

With betting starting at just $0.01 a coin and some moderately interesting free spins, Photo Safari is worth a try if you're into your safari-based slots. The unfortunate thing is that the theme has been much better served online by other developers, most notably the 243 ways to win action of Cryptologic's safari-themed Savannah Sunrise and Betsoft Gaming's lush 3D video slot on the same African theme, Safari Sam. That latter game, with its random Wilds, Cascading reels, and mega free spins, means that if you only choose one safari slot, make it Betsoft's.