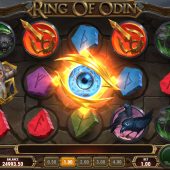 Ring of Odin slot by Play'n Go presents us some pretty hard core Norse mythology here via powerful music interspersed with the clash of iron weapons and a grim looking hall as the background, guarded by two imposing warriors. I must say it looks very good thus far, but as a Swedish developer Play'n Go have made remarkably few Norse-themed games with Dragon Ship slot not particularly memorable, their 3-reel classic Eye of The Kraken very good with the most renowned possibly being the grid game Viking Runecraft. Can we our bankroll be rescued from these looters or will it prove to be the ring of doom?

We see 5 reels of 3 rows each on Ring of Odin slot with 10 pay lines. The Warrior Wild which can appear stacked like the other symbols, pays 30x for 5-of-a-kind same as the Sword, Horse 20x, Raven 15x, Wolves 10x with four coloured Runes all paying 5x for a full line. Scatters in the form of Eyes appear on the odd reels and the in-play feature is the same as the game name, Ring of Odin.

On any spin the Gold Ring of Odin can appear in the centre position on the grid. When it does you get the re-spins. This means the whole centre 3 reels become a block of 9 Rings and you get a re-spin for each incidence of the symbol that landed in the ring, and a re-spin for each one landing subsequently.
You can also trigger Draupnir free spins whereby the next incidence of the symbol not only adds another re-spin but fills the centre 9 positions up with that symbol so the outside 2 reels only spin, so you'll want to see those Wilds on reel 1!

You get 4 multiplier free spins when the Eye scatter lands in the ring and then re-spin for multipliers in those centre 9 positions so you can get 2 right up to 9x multiplier for your 4 spins here and some good potential.

If you trigger the feature via scatters on reels 1,3 and 5 you get 4 free spins with the Ring active on all whereby the symbol landing in the Ring on each triggers re-spins as described above so you get a colossal 3x3 block for each on the 4 series of re-spins.

Ring of Odin slot is good game which can just as easily throw 100x plus wins in during the base game via the Ring randomly appearing, as it can in the free games of either format. You get decent graphics and no juvenile stuff here with a good soundtrack and great animation sequences. The bonus rounds both tend to go on for for quite a while as each of those 4 free games usually involves several re-spins too and even better when those big wins start to stack up! Your RTP is 96.21% and that's even more reason to pay a visit to this particular ring of fire...