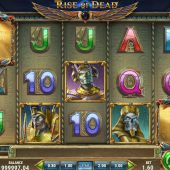 Rise of Dead slot, you'll be relieved to hear, is not a rehash of Play'n Go's Book of Dead game which in turn was copied from Novomatic's Book of Ra Deluxe back in 2016. Not that there's anything wrong with that game, but with over 70 versions of it currently produced, we really didn't need another! We do have an Egyptian theme still but quite a sinister one with the game set over a dark stone chamber and some gentle yet creepy Egyptian style music that sounds quite similar to that of IGT's Cleopatra Plus. The Pharaohs here do not look very benevolent to me, so will our bankroll also be embarking on its final journey?

There are 20 fixed paying lines here on Rise of Dead slot with 5 reels of 3 rows and stacked symbols. The 5-of-a-kind pays may indicate to you both the potential and the volatility in play here. Wilds, which appear singly as golden Scarabs, are 125x bet and by far the top award. We have 3 different Pharaohs of which the Blue is 25x, Purple 18.75x and Green 12.5x and the rest are five card values which pay 5x down to 2.5x. There are Scrolls overlaid with the Ankh on reels 1,3 and 5 but before they come into play there are a couple of modifiers to check out here.

Each spin, one randomly selected normal symbol will appear super-stacked on all reels, which you'll see as they spin. This could assist in multiple line pays - or not.

Gift of Gods - randomly the game will present you with reels 1,3 and 5 frozen with the same symbol displayed. Reels 2 and 4 will spin and of course you hope for a match. To help you, the Wilds now appear stacked on those two free reels.

Hopefully you won't be ancient yourself by the time those 3 Ankh Scrolls land on reels 1,3 and 5. When they do you get 10 free games with retriggers possible and also 2 extra spins for one scatter and 4 extra spins for two. Your enhancement is that the card values will now be in stacks 8-high and the Wilds either 6 or 7-high. We aren't done yet as any Pharaoh symbols will expand if they are involved in a win too. A volatile bonus that Play'n Go tell us can yield up to 5000x bet!

Alas I did trick you slightly in the introduction - Rise of Dead slot is actually a clone of Play'n Go's existing Gold King slot as opposed to Book of Dead which the name may have suggested. That said, it's a decent mechanic although some may find it a little volatile but I personally liked the music and sound effects and these made it enjoyable. The RTP is 96.52% and it can kick out some big totals in free spins, but these aren't easy to get unlike the often zero-paying Gift of Gods random feature. Play with caution as raising your balance here could quite literally be as unlikely seeing the dead rise...