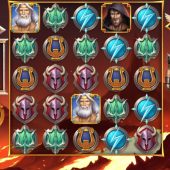 Rise of Olympus slot is another addition to Play'n Go's increasingly popular series of cascading grid-style games with both entertaining random features, spectacular graphics and big-win potential. You may have already seen and played Viking Runecraft or Moon Princess which were themselves based on their oldest slot of this type, Gemix. Here we have the Olympus as the main theme with Hades, Poseidon and Zeus demonstrating their various powers with some dramatic in-play action and their own bonus rounds which are enhanced by some stunning visuals. The grid is set over a foreboding mountain scape and you'll see one of the Gods guarding the grid on the right, and along with the intense and dramatic sound effects the mood is well and truly set! These Gods can be volatile, so will our bankroll see their benevolence or disappear forever into the underworld of Hades?

On the grid...
No pay lines here on this 5x5 grid which pays for any vertical or horizontal row of 3 ,4 or 5 consecutive symbols. Icons cascade down as individual tiles and winning ones are removed with the exception of any Wilds created. Wilds don't appear but are created between the outside tiles of any 3-of-a-kind wins dropping in naturally. They stay on the grid until used up in other wins, or no more wins can be created..

No further symbols appear from above to replace winning ones unlike in slots such as Bonanza and Gonzo's Quest but if you clear the grid in full you trigger the potentially lucrative free games, which we'll see shortly. There is an increasing multiplier in the base game which rises by 1x for each winning action and is only limited by the end of winning combinations or a grid clearance. The pays for 5-of-a-kind (5OAK) wins 50x bet for Wilds, 10x for each of the three Gods Zeus, Poseidon and Hades then 3x for the Lyre or Helmet and the low ones pay 2x for the Green Trident and Blue Flash. TO help us hit these wins, we can get assisted by each God in the base game random enhancements.

Hand of Gods
Each God will stand on the right and can randomly enhance any losing spin.

Hades - will transform all of one symbol into another.

Poseidon - adds either one or two Wilds to the grid.

Zeus - destroys two sets of symbols and removes them.

The God will change after each random event, but these events may help you trigger the Wrath of The Olympus respin. You have a meter with 3 sections and any 3AOK God win fills the first, 4OAK the second and a full 5OAK the third. If this is filled you then activate all the above Hand Of Gods features in turn which occur when a cascade doesn't produce a win. You can get a decent total here and along with it may or may not trigger the free games by clearing the grid.

Free spins
Once the grid is cleared you can choose either 4 Hades spins, 5 Poseidon or 8 Zeus spins. Their respective Hand of Gods enhancement will be active on every losing spin and this time the multiplier doesn't reset after each spin is done. This means it can rise throughout the feature to a maximum of 20x! If you fill the meter mentioned above (now called the 'Recharge Meter') you will earn 4, 3 or 2 extra spins respectively for Hades, Poseidon and Zeus. Like the multiplier, the free spins total is capped at 20. You can win up to 5000x bet in the bonus as seems to be the case with all Play'n Go's cascade games recently.

Our View...
Rise Of Olympus slot is one of those rare games that immediately grabs the player's attention with the general appearance, graphics, sounds and special effects. Quite often this can be somewhat detracted from by the general game mechanic and features but certainly not in this case. The random features are frequent and the base game isn't quite as volatile as Moon Princess for example so a good run for your balance should be had. The free games aren't easy to trigger but the Wrath of Olympus mini-feature should fill the spaces in between, but once you do get the free games they are fascinating to watch and can pay as colossal as these Gods stand. The RTP on Play'n Go slots can be operator-set but the 'factory' RTP is 96.53% which is on the higher side of average for most games. I will definitely be making another trek to Mount Olympus as soon as is possible...