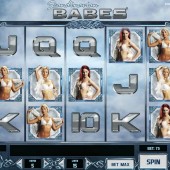 If you're a fan of perfectly-formed Scandinavian models - and I'm not talking about that IKEA shelving unit you put up last week - you may be aware of the Scandinavian Babes, a troupe of beautiful dancers from Finland who strut their stuff on-stage the world over.

A kind of 'sister act' to the more testosterone-heavy Scandinavian Hunks, the Scandinavian Babes have also been honored with their own online slot.

Renowned developer Play'n Go's Scandinavian Babes follows the betting pattern of its male counterpart, with coin bets running from $0.01 to $1.00 and 15 pay-lines across the game's five reels. You can pick up to 5 coins per line, and at $1.00 a coin that means $75. Let's see one of the Scandinavian Hunks trying to work out maths like that.

If you know anything about the Babes, you'll be pleased to see five of them forming symbols on the reels: Dasha, Reija, Geraldine, Linda and Kia are the hostesses with the mostesses, and some standard chrome 10-to-Ace symbols make up the icons. You get a little video cutaway intro sequence beforehand, but the business end is where the big bucks are.

Dash is Stacked and Can Reward 15 Free Spins

Dasha is the game's Wild and substitutes for all regular symbols in the game other than the Scatter. As with the He-Man lookalike in Scandinavian Hunks, Dasha is stacked on the reels, and if you land two stacked reels of Dashas on reels 1 and 5 simultaneously you will trigger a nice free spins bonus round, with 15 spins awarded.

Hit three Scandinavian Bonus icons anywhere, however, and you will trigger a Pick 'em bonus round. Pick from three of the posing, pouting ice maidens and you will be rewarded a cash prize.

Not coming from Scandinavia I'm not too sure how popular the Scandinavian Babes are, but they must be big enough to warrant their own online slot. For sure, there are plenty of eager Scandie slots fans out there, so the match could be a match made in heaven. You might want to check out the notorious Playboy slot by Microgaming if you get along with this slot.