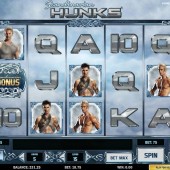 While slot developer Play'n Go's entertainment-themed Scandinavian Babes slot will appeal to the guys, here's its sister (or should that be, brother) online game for the girls: Scandinavian Hunks.

Finland's Answer to the Chippendales

Based on the real-life Chippendales-style troupe of strippers and dancers from Finland (think Vikings with haircuts) Scandinavian Hunks even kicks off with a little video intro showing the boys strutting their brain cells (all five of them) on-stage.

The game reels are surrounded by screen-high images of the Hunks, while on-screen the five boys - Jucci, Mauno, Jani, Sauli, and Riku - jostle for muscle space with some chrome 10-to-Ace icons. There are just the 15 pay-lines in the game, but you can adjust the coin level from 1 to 5 a line, so there's actually a $75 max. bet in the game.

Win 15 Free Spins with the Help of Jucci

Meanwhile, Jucci acts as the game's Wild, substituting for all symbols in the game other than the Scatters. He also acts as the bonus trigger and expands on the reels. If you hit two columns of Juccis you will trigger a free spins round with 15 spins awarded.

Collect the Hunks to Pick Your Prize

During the bonus round reels 1 and 5 are held and act as expanded wilds. There's also another bonus round slicker than one of the Hunks' oiled 6-packs. Hit three Scandinavian Bonus symbols anywhere and you'll trigger a simple Pick 'em bonus. Simply choose one of the Scandies to reveal a cash prize.

While stripper-themed slots may not exactly be rife in the world of online casinos, Scandinavian Hunks certainly will appeal to the female players among you (and maybe some of the men too).

As for some other great nights out slots online, Playtech's Chippendales slot is a must-play, as is Betsoft's cracking 3D dance-themed At the Copa. You might not see the IKEA Boys ever strutting their stuff in a Latin club but some players would certainly love to see that.