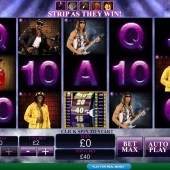 “You can leeeeave your hat on!”… the opening lyrics to a song that is usually code for men to exit the room hastily and for women to suddenly turn into crazed maniacal beasts looking for blood… in the form of a naked male ripped with muscle and slathered in grease.

Ah, if you’re a man, like me, then you will be sitting here wondering why you’re reading a review for the Chippendales slot. If you’re a woman then you will either be in denial about your uncontrollable urge to view the male figure or you will already be playing this like the psychotic lady you pretend you’re not. Playtech will go down as a legendary developer with the ladies for releasing this slot and will almost certainly be the target of vitriol and ridicule from the male species because of this release.

Bet From 20p per Spin

You should basically consider this as being the equivalent of actually attending a Chippendales gig. You are essentially throwing your money away to see semi-naked men.

These “hot” men are on the reels and you can play from as little as 20p per spin up to a whopping £500 per spin. How badly do you want to see those muscles?! I’ve probably lost the entire heterosexual male readership by now.

Roll Up Ladies, There's a Stripper for Everyone!

Luckily for the ladies, there is stripping involved. Every time you hit a winning combination including one of the male Chippendale symbols then that Chippendale will take an item of clothing off and appear slightly more naked on the reels in the next spin.

There are three levels of stripping so get hitting those winning combinations ladies! There’s a cowboy, biker, fireman, rock star and government spy for you to drool over.

The main bonus feature in Chippendales is the Sizzling Spin Bonus. This is triggered when you hit three Wheel of Fortune symbols on Reels 1, 3 and 5 at the same time. You will then see one of the Chippendales on the reels spin the wheel to reveal which prize you have won.

That is pretty much all this slot has. It’s not quite as thrilling as the Incredible Technologies slot, Girls Day Out, but could certainly be seen as the female equivalent of the Playboy online slot from Microgaming.

However, this slot is fairly limited in what it offers but if you are keen to play a Chippendales slot then it’s unlikely you’re playing for the bonus features…