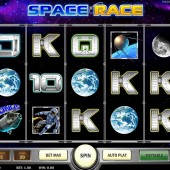 You have to hand it to slots, developer, Play 'n'  Go. Elaborate intros, expensive cutaway scenes and long drawn-out animated win sequences - you won't get any of those in a Play 'n' Go slot. Pah – leave that nonsense to Betsoft Gaming and their over-complex slots intros.

Taking a well-worn slots theme - space and sci-fi - Space Race takes a look back at the technological race between the US and USSR to be the first pioneers of the cosmos.

After a basic intro sequence, you’re onto the reels where a gentle ambient sci-fi soundtrack accompanies the gameplay. Even when you spin the reels, they land with a nice metallic thunk.  As for symbols, it’s what you’d expect from a space-themed game: plenty of planets, rockets, sci-fi looking 10-through-Ace symbols, astronaut, satellites and meteors.

Here you’ll win free spins, but not only that, the Scatter becomes Wild during free spins in true Play 'n' Go fashion. The rocket symbol triggers another Pick Me Bonus when hitting three or more anywhere across the reels.

With some nice graphics and simple if unspectacular bonus features, Space Race is great for those slots fans who like a journey into the solar system. If it's got you in the mood for other space-themed slots, check out Cryptologic's Outta Space with rockets galore, or Microgaming's take on the sci-fi theme, SpaceBotz; both games should pass the time while you dream of a world past our atmosphere.