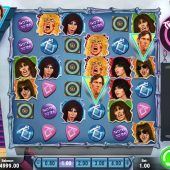 Twisted Sister slot by Play'n Go adds another title to their Heavy Metal range, having already made Demon slot, the even louder Sabaton slot and who could forget House of Doom slot? There have been a few by other developers too with Leander's Megadeth slot and the line up would not be complete without Netent's Motorhead slot either. Here we get for the first time a on for this kind of theme a grid cascade mechanic like that of Moon Princess slot. We open it up to hear "I wanna Rock" which was one this American 1980's bands' most popular hits, the meter on the left is a guitar fret board and background amps and speakers to complete the concert setting. Will be our bankroll be rocking after playing this, or twisted out of shape?

There are 6 columns of 7 tiles each and we need 5 or more adjacent to win and have replacements cascade down on Twisted Sister slot. Your pays are highest for 25+ clusters and lowest for clusters of 5. The five band members pay 250x bet down to 100x for 25+ and 1x down to 0.6x for the minimum 5. The five lower symbols are the whole band together (called the Mega Band symbol which is a 2x2 colossal tile), Plectrum down to Badge which are 50 down to 20x for 25+ and 0.25 down to 0.1x for the minimum 5. You can Wild tiles and Angry Dad scatter/Wilds and that complete the tiles available here.

This 2x2 tile will combine adjacently with any single band member to form wins and also has an enhanced role when we land 4 or more Angry Dad scatter/Wilds to trigger the We're Not Gonna Take It feature. When this happens, the Mega Band will move around the grid connecting with each Angry Dad Wild in turn creating bigger wins. After any base game spin, to help trigger this, 2 randomly placed Angry Dad tiles may be added. It's better to get 5 or more, as every one over the 4 required will raise the multiplier for the whole sequence by 1x. It's also worth noting that the Angry Dads only get counted on the trigger meter if they are used ina winning cluster! You don't get any more Angry Dads appear during this but the Guitar Charge meter remains active and will likely give you multiple enhancements before the rounds ends.

On the left is a Guitar Fret board with 15 sections in 3 blocks of 5. Every winning cluster of Band Member symbols will fill the meter. Once it hits 5, 10 or 15 you will get a randomly selected modifier applied for each block of 5 filled:
Scream - destroys all non-Band Member symbols around the tile selected by the Scream.
Go Wild - transforms the selected symbols into Wilds.
Unite - transforms selected symbols into the one chosen.

Twisted Sister slot is nothing new in terms of theme or mechanic as this game is pretty typical Play'n Go grid game stuff, with a decent 96.20% RTP. You get plenty of noise with the Guitar Charge modifiers quite frequent but rarely will the base game yield much overall. You need We're Not Gonna Take It feature for the big wins and this is ver hit-and-miss. You may wait a while for it and if it pays 50x bet or less you're likely to be on a losing session overall. The continual "I wanna Rock" on 5-second repeat rapidly gets tiresome too although you can silence the music. The game is okay for those who want an alternative to Moon Princess slot or something, but this is a concert I won't be buying a ticket for...