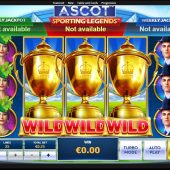 Ascot Sporting Legends slot by Playtech is their sequel to AP McCoy and adds to their expanding collection of horse racing-themed games which already includes the old classic Frankie Dettori's Magic 7. As Netent released the highly regarded Scudamore's Super Stakes not long before this game, Ascot Sporting Legends will have quite a job on its hands to be as well received. So we begin with the reels set over a lush racetrack with the stands at the sides and some corny horsey-style music as we spin along with some triumphant trumpeting sounds every time a win appears, however small. So are the odds in favour of our bankroll increasing here, or will it take a right royal roasting?

We start with 25 pay lines over 5 reels of 3 rows and standard symbols single although it seems the top 2 can appear stacked. The 5-of-a-kind pays are 30x bet for the Lord or Lady, 12x Rosettes, 10x Pocket Watch or Golden Horseshoe with five card values paying 6, 4 or 3x for a full line. Horse scatters appear on the odd reels only but before we talk about bonuses, let's hear something about the interesting variety of Wilds Ascot Sporting Legends features and which can land on all 5 reels and pay 40x bet if they do.

So having landed 3 Horse scatters on reels 1,3 and 5 you'll get to pick from one of 3 Ladies dressed in their finery and flamboyant hats. You'll receive 10, 15 or 20 free games which can retrigger or for 2 scatters you'll get 4 extra spins. Now there is no multiplier in play here and seemingly no enhancements either, nor are Wilds more common. Weird.

Ascot Sporting Legends slot certainly isn't Playtech's finest hour and before I start pointing out the shortcomings, we'll begin with the poor RTP of 92.96 to 94.96% depending on which casino is offering it. The graphics, animations and sounds are basic but even then the appearance of the slot suggests far more than it will ever deliver. It's hard hitting anything of note in the base game even with the 3 differing Wilds and the free games are shockingly bad. The total returns are often 5-10x bet and the lack of any enhancement makes them feel like a mistake has been made in the RTP distribution, as surely there should be some potential in a free games bonus? I can only say that the odds against me ever visiting Ascot again are extremely high...