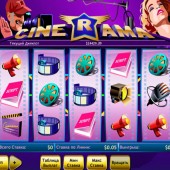 Here's a cracking little slot for fans of movies. Playtech's celebration of all things celluloid, Cinerama, isn't based on one film in particular but rather pays tribute to the actors, writers and directors who have made movies possible over the years.

So, on the reels (five of them here and with just the five paylines overall) we get scripts, a megaphone, a Hollywood star, headphones, mics, lights, reels of film, clapperboards and a director.

The Wild is the camera and it substitutes for all regular symbols in the game other than the Scatters.

Five Wilds pays a nice 10,000-coin jackpot. However, it's worth playing at the maximum coin bet as if you hit five Wilds at the top range you'll win the progressive jackpot.

Find the Directors to Win at the Oscars

Look out for the Headphones and Director icons. Both will trigger the bonus rounds in the game.

First up, get three Director icons on a winning payline left to right and you'll have a chance to bag some extra cash in the Pick'em Bonus. You will have to choose a leading man and lead actress. If they win awards at the Oscars you'll win a juicy bonus.

Find the Headphones to Earn Big at the Box Office

Secondly, land the Headphone icon on reel 1 and you will trigger another Pick'em Bonus.

Simply back which film you think will do well at the box office. Whichever is your choice you will earn a percentage of the profits it takes. (We're guessing the film in question won't be James Cameron's Avatar or else you'll be earning a very tasty haul indeed.)

Cinerama is one of those Playtech slots that doesn't set the world alight with its appearance or gameplay but certainly offers just enough bonus action to keep slots players interested.

I would have liked to have seen some free spins, but as a film buff I was taken enough by the subject matter to let this slide.

Luckily, in slotsland there are plenty of excellent film-based online slots - some based on individual films and some celebrating Hollywood itself.