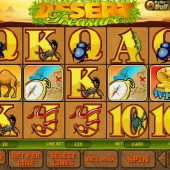 Desert Treasure is a Sahara Desert-themed slot from developer Playtech that has proven to be such a smash hit with online slot players across the globe that it spawned a sequel in the form of Desert Treasure 2.

The 5-reel, 20-payline game is pretty flawless in its simplicity. Symbols in the game include Arabian princesses, traders, camels, oasis and the regular symbols are decorated with insects and lizards.

Watch For The Wild Cobra!

The golden cobra acts as the Wild in Desert Treasure and it substitutes for all symbols except for the Arabian princess and compass scatter symbols.

These two scatter symbols are key to triggering the bonus features within the game. They can award instant prizes when they appear on the reels.

The princess scatter symbols can also trigger the free spins bonus round where you not only get handed a reward of free spins if you hit three or more of them across the reels but you also get a 3x multiplier to any winnings during the free spins.

If you hit three or more of the compass scatter symbols it will trigger the exciting bonus feature where you get to take on the role of a trader and you must choose an item from a selection on display to reveal a bonus prize win.

Side Bets With the Dollar Ball

Desert Treasure also includes a nice little Playtech feature called Dollar Ball which acts as a side bet function within the game. It gets its name due to the fact that it costs $1 to play alongside the main game. In this game, you are drawn five lottery numbers and you must try to match the numbers to win a big prize.

There is a reason Desert Treasure has been gifted with a sequel and that is because it is such an enjoyable slot to play.

There are other desert-themed slots out there such as WMS Gaming’s Egyptian Riches and IGT’s Cleopatra but this is one of the best out there.

The range of opportunities to win prizes is a very alluring attribute of this slot and the closest rival to this slot is its successor Desert Treasure 2.