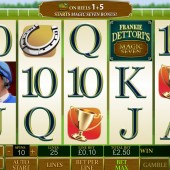 Online slots about the gambling world tend to kill two birds with one stone: they offer an exciting theme for a slot, celebrating both the world of gaming while, er, actually letting you gamble for real money.

High profile slot developer Playtech’s well-known journey into the world of the Sport of Kings is this take on horse racing: a 5-reel, 25-payline slot celebrating the career of one of British racing’s legends.

Frankie Dettori’s Magic Seven is named after that momentous day in 1996 when Italian-born Dettori won all seven races on Champion’s Day at Ascot. A lot of punters got rich that day (including one British gambler who banked a £500,000 haul for betting on all seven wins).

If You Like This, Have a Punt On These...

Well, now you can attempt to follow in those lucky punters’ footsteps with a journey into horsey land that on the surface doesn’t look a million miles away from other horseracing-themed slots like NetEnt’s cracking Champion of the Track or RTG’s Reel Series horseracing slot, Derby Dollars. However, delve a little deeper and there are some real thrills in store.

On the reels – set against a deep green background – we get champion’s cups, finishing posts, horseshoes and various images of Dettori in action. Making up the reels are some fairly standard 10-through-Ace symbols.

The Wild symbol in the game is the Frankie Dettori portrait. Frankie substitutes for all regular symbols other than the Scatter and Bonus icons, and five Wilds across the reels pays out a nice 7,777-line bet jackpot – a neat nod to the Magic 7 of Dettori’s momentous achievement.

There are two Scatters in the game, meanwhile. The Frankie Dettori’s Magic Seven logo triggers a free spins bonus if you hit three or more across the reels anywhere.

First off, you’ll need to have a little race to determine how many spins you get. Pick a nag to run the race, and if your horse comes first, you’ll win yourself 35 free spins. If it comes in second you’ll win 15 spins, and if it’s third 10 freebies are yours.

Extra Wilds and Scatters are added to the reels during the free spins round, making the bonus feature potentially pretty lucrative.

Secondly, look out for the Magic Seven Bonus icon on the reels – the racetrack symbol. If it appears on reels 1 and 5 simultaneously, you’ll trigger the second bonus feature of the game.

Essentially, the Magic Seven Bonus is a Pick ‘em Bonus round: a racetrack will appear on-screen and it’s up to you to select areas of the track to reveal cash prizes. There are 20 spots around the track, with cash prizes (1-5x your stake) and a multiplier ‘trophy’ (1x-7x) up for grabs.

Every time you reveal a trophy, you will see some video footage of one of Frankie’s majestic rides on that day in 1996. Just keep picking until you hit the ‘Collect’ button and you’ll be returned to the base game screen.

As good as other racing-themed slots? For my money, Champion of the Track just pips this one by a nose. It might not be a slot for everyone's taste but it's worth a punt as they say at the tracks.