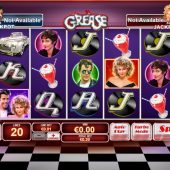 Grease slot I suppose was inevitable on the 40th anniversary of the 1978 Hollywood smash hit musical, starring John Travolta and Olivia Newton John. As a schoolboy at that time I recall my ears being assaulted for several months that sorry summer with songs like 'You're The One That I Want' and 'Better Shape Up' almost on a continuous loop whenever the TV or radio was on. Time is a great healer though but even with the passing of 4 decades I am opening Grease slot with great trepidation due to the near certainty I will be exposed to those tracks again after spending all those years since avoiding them. Normally about now I would surmise whether my bankroll would be safe on the slot in question, but the quicker Danny and Sandy take my money the quicker I can run!

The grid is transparent and the 5 reels of 3 rows each offer us 20 pay lines. We do get a musical score in the background, but fortunately it's just an instrumental from the movie soundtrack. The chequered floor of the Rock Diner is our background with the jukebox in the corner opposite the bar which sets the scene for our main two characters.

The icons are all single with the exception of Dan and Sandy who appear fully stacked as both a couple and singly. The couple is the highest pay at 20x bet for a full line of 5 which would be 400x for a full screen. Individually they pay 10x with their friends each paying 5x and the car or soda 2x. Card values make up the last 4 standard icons at 25 or 20 coins each. There are Sweetheart Wilds on all reels with no multiplying effect. Dan and Sandy also offer us our first in-play features too.

Rockin' and Rollin' Re-spins - A full Dan or Sandy on reel 1 locks in place along with any other of their respective symbols elsewhere plus Wilds. There are 3 re-spins which hopefully add more winning symbols to create a decent hit.

If the stacked Dan/Sandy couple symbol lands reel 1, the same happens but all the individual ones on the reels turn to the higher-paying couples icon too.

Sweetheart Wilds - on any spin, 1-8 can be added to the grid.

There is also a jackpot feature randomly triggered. The Dan jackpot is seeded at 2000 and the Sandy at 200. A red curtain descends and Grease logos are picked until you get three of either Danny or Sandy for their respective progressives, one of which you are guaranteed.

Our main feature requires the Grease scatters on reels 1, 3 and 5. You get to pick from 3 features as follows;

'Better Shape Up' - 12 free spins with only character symbols on reels and Wilds. All stacked Dan/Sandy become the combined higher-paying one.

'Rydell High Yearbook Bonus' - pick photos to win up to 100x bet. 5 levels to get through for best win.

Yes, in the bonuses above you get to hear clips of their respective chart songs, and the double whammy is that neither of the two free spins bonuses can retrigger.

Grease slot is basically low-volatility tosh but if you like the theme you'll probably find it great fun to play as the random features, songs and clips will appeal to you. The randoms occur frequently and the Rockin' and Rollin' Re-spins can pay quite well if landing more than one 5-of-a-kind although that doesn't happen too often. Why anybody would want to pick the Yearbook bonus with a 100x limit when far more could be achieved in one of the free spins ones, I dont know! The RTP isn't great at only 94.46-95.55% which includes a 0.99% progressive contribution but that shouldn't affect you in the short term and you'll be pretty certain to go through the features reasonably quickly. It's really all about taste but Grease slot definitely isn't the one that I want ooh ooh ooh...aaarrrgh! 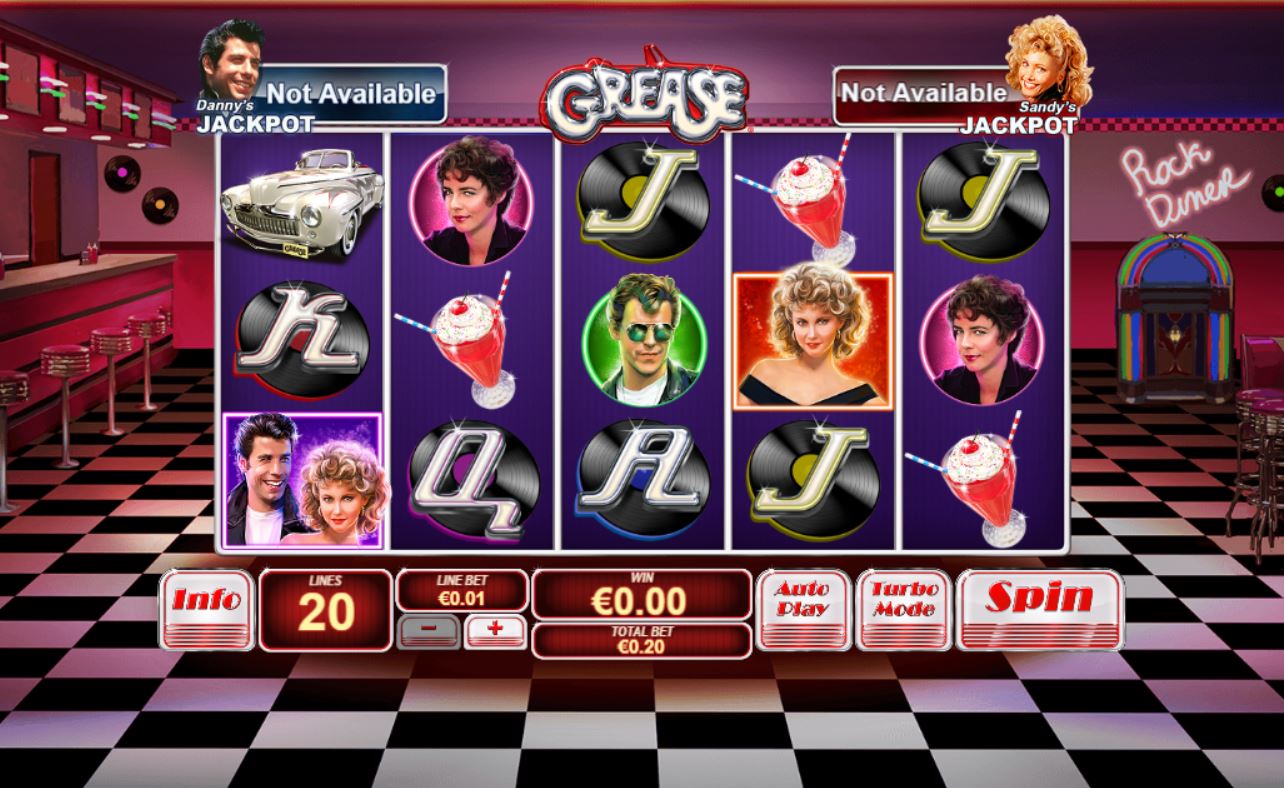