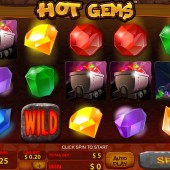 A lovely animated intro sequence that wouldn't look out of place in a Betsoft Gaming creation sees a bearded old miner prospecting for diamonds. He unearths a veritable treasure trove with his trusty axe and unleashes untold riches.

Whether you hit the same level of riches in Playtech's Hot Gems online slot is down to your skill at triggering the generous free spins round.

This 5-reel, 25-payline slot has the hot gems that are named in the title filling the reels along with some other mining-related symbols that will make you feel like you're in the good ol' US of A during the great gold rush.

Trigger a Jackpot Worth 5,000x Your Line Bet

Hot Gems moves along at a nice pace, and on the reels the graphics are pretty no-nonsense.

There are six different coloured gems to find and land, but the biggest payers are the mining icons: the minecart, the pickaxe, the lamp and the old prospector himself who pays a 5,000x jackpot when you hit five of him on the reels.

When you trigger the bonus round (by hitting three Free Games Scatters on reels 1, 3 and 5) you will win 15 spins with a 'Collapsing Reels' multiplier.

You start off with a multiplier of 1x, but with every win the multiplier goes up by one. You can reach x5 in this way.

A more standard Collapsing Reels feature is in action during the base game. Simply hit a winning combo on the reels and the symbols in the winning combination will vanish, or 'explode' to allow the symbols above to fall into their place.

This can keep on going, and if you've ever played games with Tumbling Reels or Cascading Reels you'll get the general idea.

If you're familiar with Playtech's slots, you may get a certain sense of déjà vu when playing Hot Gems, as it's fairly close to another Playtech 'gem': mining-themed Dynamite Digger.

In that game 'exploding' winning combos will disappear from the reels to be replaced by the icons above. However, with that game you're not overly blessed with bonus features so it might be best to stick to Hot Gems for now.