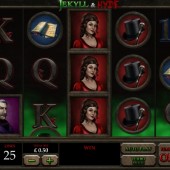 Joining the ranks of popular Playtech slots such as Sherlock Mystery and Desert Treasure 2 is the dark and sinister slot game Jekyll and Hyde. This 5 reel, 25 payline slot is based on the adult horror novel The Strange Case of Dr. Jekyll and Mr. Hyde, by Scottish writer Robert Louis Stevenson. The novel, written in 1886, tells the story of a man who changes into a monster after drinking a strange concoction made with white powder. It has since been turned into several TV dramas, movies and several video slots. Betsoft previously released their own version of this scary tale with Dr.Jekyll and Hyde and before this Genesis Gaming rolled out Jekyll & Hyde slot.

Any regular slot player will tell you straight away that Playtech’s Jekyll and Hyde has similarities to one of Microgaming’s stalwart’s – Immortal Romance. In fact, you could be forgiven for thinking that this is Playtech's attempt to offer something in their own network that matches up to this game. That’s certainly the first thing that crept into my mind when I saw the characters on the reels, listened to the sounds and took in the various elements of the game. Dr Jekyll’s female assistants appear on the reels, along with top hats, potion flasks, journals and both Jekyll and Hyde. The graphics are dark and mysterious and the game sounds are eerie, surprising you at times.

Mr Hyde in is his full ghoulish attire plays the part of the Wild symbol, expanding on reels 2, 3 and 4 when he appears. This can help make up extra wins in both the main game and any bonus features.

Feature On or Off?

On the menu bar at the foot of the game is a button which says ‘Feature On/Off’. By choosing to have it on you will double your stake, however there is a benefit to doing this. It will turn the potion flasks from green to red - a ‘powered up’ state. Should the scatters land in positions just off the screen they will still be valid for a bonus feature. This is probably easier seen when you play the game, so I suggest trying it for a little while to see if you like it.

Regardless of which mode you play in, the free spins bonus feature is triggered by 3 or more scatter symbols on any of the 5 reels. You will be offered a choice of two different features, which are as follows:

Jekyll Spins – Increasing multipliers are triggered by the potion flask appearing on reel 5. Receive an unlimited number of free spins until the flask breaks. Before this point you are awarded between 1x – 5x multipliers on all wins.

Hyde Spins – The appearance of the potion flask in this feature turns one of 3 characters Wild, creating more winning possibilities on the reels. Once all 3 characters are unlocked the next potion flask scatter will be the broken one, which ends the feature.

It is hard to tell if one of these features is more effective than the other. My advice is to try them both out and see what you like. I am slightly more drawn to the Hyde Spins myself, but alternate between them when the feature comes up.

Whether this is or isn’t an attempt to counteract the popularity of Microgaming’s Immortal Romance, Jekyll and Hyde is still a very enjoyable slot game. The main game offers a good number of winning opportunities and the bonus feature rarely lets you down. The sounds and graphics have been well thought out, creating suspense and intrigue that keeps you coming back for more. I have a feeling Jekyll and Hyde could prove to be a real hit for Playtech. If this sort of game is your thing then you might also want to check out IGT’s Day of the Dead or Net Ent’s Blood Suckers.