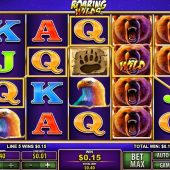 Roaring Wilds slot gets the name because of a rather aggressive-looking grizzly bear that forms one of the game's stacks. The stacks are the central focus as all symbols, which appear stacked on this 40 pay line 5 reel and 4 row slot. The theme is thus wildlife from N. America and Canada so you also see the wolf and cougar as well as the bear's favorite food, salmon - that's wild salmon and not tinned. The reels spin with little noise aside from the appropriate sounds of any animals if they form a winning combination.

Our friend the bear forms the game's Wild and he appears stacked up to 4 rows high on all 5 reels. He is also the highest paying 5-of-a-kind at 25x stake thus giving a potential base game hit of 1000x for a full screen. On each spin a randomly - selected symbol will spin 'super stacked' in that it can be say 20 positions high instead of the normal maximum of 4. You can trigger free spins by landing 3 or more 'Big Cat' paw prints anywhere in view.

Bonus with A bite

Having landed the scatters necessary, you commence with 15 free spins. There is no multiplier and no obvious enhancement which is odd, I assumed maybe in the bonus all the super stacks would be the highest animal symbols but it appears not! You can retrigger the spins and the only difference I noticed was that although there are still super stacks of the lower card symbols, the animals tend to super stack more frequently than in the base game.

Roaring Wilds slot is a fairly basic game with a RTP of 96% and I would say the variance is rather on the high side will a low win frequency and relatively high awards for multiple lines of the animal symbols. The free spins are pretty uninspiring as they seem to replicate exactly what occurs in the base game, and the graphics are hardly memorable. The slot is definitely for the volatility fans as it can eat a balance quicker than the hungry grizzly on the reels. I would never choose this dull game over their Buffalo Blitz release and its not a pinch on other slots of this theme, such as the legendary Aristocrat slot Buffalo or IGT's Wild Wolf. With that in mind, I could see Roaring Wilds left out in the wilderness...