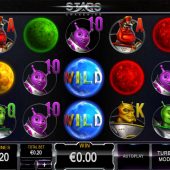 Stars Awakening slot gets us going galactic in this zany and other-worldly game from Playtech. Upon opening it up I was immediately reminded by the symbols of a hybrid of Netent's Big Bang and Microgaming's Galacticons game. This really is an upside-down slot though where nothing is quite as it seems as we shall find out. The reels are set against the background of what appears to be a Supernova photographed by the Hubble Space Telescope and we get different-coloured stars of which each has a matching alien space traveller. Will Stars Awakening be a Black Hole for your balance though?

I said this was upside-down and this begins straight away - the only normal aspect is the 5 reels of 3 rows and we get 20 pay lines. Well, sometimes we do as the slot can theoretically pay up to 243 ways because, well some symbols are designated scatter pays and these can appear stacked so if getting a full screen you would get 243 different combinations of 5 scatter pays, but it's not a 243-way slot! Baffled? Don't worry it'll become clear as day when I explain the pays.

This is another Playtech slot, like Wild Beats, that has no triggered feature so all the possibilities occur in-play. It starts to get simpler because there are only 10 symbols to worry about plus a Wild. You have some great depictions of stars and we get the Red Giant paying 25x bet for a 5-of-a-kind win, Yellow at 15x and Green, Blue and Purple Stars paying 5x bet for the 5. There is an Alien traveller in those 5 colours above and in the same order, of which each represents a card value from A down to 10 paying 2.5 or 1.5x for a full 5.

You get stacked Wild Planets on the centre 3 reels but these do nothing special, you want to see the giant 3x3 Star or Wild Planet land on the last 3 reels. The meaning of this becomes more important when we see the crazy way the game works. Any winning spin awards a re-spin in which the Purple Star becomes a scatter but like with all the scatter pays in this game, 3 on one reel doesn't count, it must be present on 3 different reels or more. This is Level 1, and if any win occurs whether standard or Purple Star scatters you go to Level 2 - on this re-spin the Blue and Green Stars are added to the Purple as scatter symbols. Any win on this re-spin and you reach Level 3 - the remaining 2 Stars of the highest values are now scatters too.

Once you play Stars Awakening slot it does actually become quite simple to understand, far simpler than it is to explain! The graphics are great as is the general appearance plus the sound effects are basic but quite okay. If it wasn't for the juvenile representations of the Aliens and we had something instead of these, apt for the theme, then it would be a hugely impressive looking game in my opinion. The RTP is a stellar 95.93% and we do have the possibility of 6075x bet for a full screen of Red Star scatters, but maybe that would be light years away from you in reality. A very original and fun slot, Playtech have turned me into a Space Cadet...