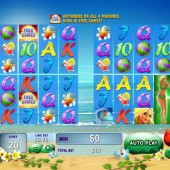 Released in Spring 2014, ready for a nice summer celebration online, Playtech's Sunset Beach slot has all the accoutrements of a typical beach-themed video slot - sun, sea, beautiful bikini-clad babes, and a bass-heavy soul track playing over the top.

Yep, developer Playtech have taken a beach, put a sunset on it and called their new slot Sunset Beach.

When you first look at Sunset Beach you'll probably wonder just how many reels are in play. In fact, the slot uses the developer's 'Multiple Machine' system, so the game screen is actually made up of four sets of five reels which spin independently.

The main draw is the girls - a brunette, a redhead and a blonde - who are amply supported on the reels by some aquatic 10-to-Ace icons, a drink, a volleyball, a cocktail and a surfer.

Land the Girls to Win Big

The three girls appear both stacked and non-stacked on-screen. The brunette is stacked on Reel 2 of all four sets, the blonde on Reel 4 and the redhead stacked on the third reel. Hit all three girls on Reels 2, 3 and 4, however, and you're looking at a mammoth payout.

Whenever a stacked girl icon covers an entire reel, that reel becomes an Expanding Wild. Not only that, but when this happens the Expanding Wild duplicates to the same reel on the next set along. This can lead to some seriously big wild wins on all four reels simultaneously.

Expanded Wilds aren't the only thing drawing you to a nice day on the beach - hit the Free Games icon anywhere on Reel 3 on all four machines at the same time and you will land 15 free spins.

Obviously, with four sets of reels doing their stuff at the same time, it could lead to some serious bonus cash wins. Extra spins can be won by landing further Free Games icons during the session. Two spins are won for hitting a single Free Games icon.

There's no doubt Sunset Beach will bring out the big guns this summer. It does offer the lower bettors some options, with line bets beginning at $0.01, but with the pay-lines fixed - and four sets of reels mandatory - it can soon add up.

If you're looking for something a little simpler in terms of summer fun, check out NetEnt's sun, sea and sand slot Beach while or the night-time thrills of Club Night, also from Playtech, should get you in the mood for a night on the beach.