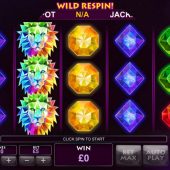 Super Lion slot luckily doesn't mean we've got yet another African jungle or safari-themed game like Raging Rhino or King Of Africa. in fact the game is ultra modern with a purple starlit background and nice neon gems on the reels. The sounds are futuristic but basic, just effects for reel spins and stopping. So will Super Lion slot come at us with a roar or a whimper?

I am trying to delay you all guessing what game this is but that's a considerable task as you will soon see. There are 10 pay lines over 5 reels of 3 rows and the symbols are all stacked except one. There are no scatters because there is no bonus round and we start with jewels of 5 different colours which pay 6x bet for the yellow gem 5-of-a-kind (yes, I know you've got it already!) and then green, pink, blue and red for 5, 4, 3.5 and 3x bet respectively. There are two premium icons being the Omega Crystal at 30x and the Red 7 at 12.5x stake for the 5.

There is no feature as I said but any Rainbow Lion appearing on any of the centre 3 reels will expand fully, pay any wins and then hold for a re-spin and then pay again if applicable. Should another one land you get another re-spin up to a maximum of 3 if they all appeared one at a time. That's all folks!

Super Lion slot should really have been named 'Lionburst' but with the developer emulating the purple background of Netent's Starburst, rainbow-coloured expanding symbol and game mechanics Playtech had to draw the line somewhere. There is one difference which makes it even worse than Starburst, if that's possible - the top award for a full screen here is only 300x bet as opposed to 500x on the aforementioned. So it's even lower in volatility despite a similar RTP of 96.50%. You know what to do: if you need to get through a bonus wagering requirement etc... However, I find it hard to call this Lion 'super' - more of a pussy cat in my opinion.