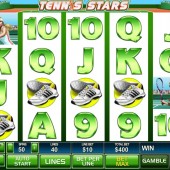 At first glance, Playtech's sports-themed Tennis Stars is as bland as an Andy Murray press conference. However, delve a little deeper and it's anything but (which is more than you can say for Andy Murray).

A 5 reel slot played out over 4 rows and 40 paylines, Tennis Stars is firmly set in the world of balls, aces and dour Scotsmen. And Playtech have obviously got video gamers in mind when it comes to the bonus rounds.

The graphics are lovely - if a little computer-generated - with the man and woman star the top payer at 5,000 coins for hitting five symbols. Elsewhere there are tennis shoes, tennis balls and green 10-through-Ace poker symbols.

The championship trophy is the Wild and substitutes for all symbols in the regular game other than the Scatter. It only appears on reels 2, 3, and 4, but when it does you will bag a 10x total bet multiplier on your win and 15 free spins with a 3x multiplier.

Win up to 50x Your Bet in the Championship Bonus

The real draw in the game is the Championship Bonus, triggered by landing three or more Tennis Racket Scatters anywhere on the reels. Here, you get to pick a male or female tennis star, then pit your racquet skills against the computer opponent. Choose from two serves - flat or slice - and if you get your ball through you win points.

Even if you lose the game you will win cash, but winning the game will see you awarded up to 50x on your bet. The number of aces you hit, meanwhile, determines your prize multiplier. I triggered the round three or four times and always hit about three aces on my turn, leading to some pretty mega prizes.

Tennis stars is definitely a game for tennis and action fans alike. It has plenty of chances to hit it big, and if you get through to the Championship Bonus you're laughing all the way to the bank.

Luckily there are plenty of tennis alternatives if this doesn't quite float your boat. Microgaming's sports-themed Centre Court has a nice free spins round, while OpenBet's Top Trumps Tennis Stars is packed with famous faces. For my money, this game is Game, Set and Match above everything else.