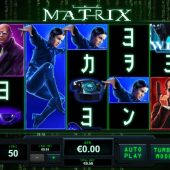 The Matrix slot uses the cult 1999 Sci-Fi film of the same name starring Keanu Reeves and Carrie-Anne Moss as its subject matter and I must say Playtech have carried this off very well here. They usually do when a licensed theme is applied as we saw with Rocky and Top Gun and in this instance the green computer digits form the background and we hear some very foreboding music from the movie which increases in tempo as we spin. So far, so good but how hard will it be to extract some cash from this digital underworld?

We are given 50 pay lines here and the characters are stacked so the pays for 5-of-a-kind won't be huge by any means, and the single Wild is the top award at 10x bet followed by Agent Smith at 5x, Morpheus at 4x and Trinity, she pays 3x our 50-coin bet for a full line. The Sunglasses and Phone pay 2.5x with the four digitized card values awarding either 1.5 or 1x bet.

Now the sinister Black cat does make an appearance and as in the movie it triggers the Deja Vous glitch when appearing fully stacked on reel 5 as an extra Wild. When it is fully in view 4-rows high it will replicate to reel one so there are effectively at least 8 Wild positions which will then shuffle across the grid to then award any pays. If you land this feature with one or more standard Wilds in view too your new Matrix can be quite rewarding.

You will see a free games scatter on reels 1, 3 and 5. When all three appear you will be treated to a movie clip then are offered a choice of two modes:

Agent Smith spins - you will be awarded 8 free games which cannot be retriggered and each spin more and more Agent Smith icons appear singly and stacked on the reels. As the top-paying standard symbol you could see a full screen for 250x bet in this mode!

Neduchadnezzar spins - unlimited free games begin and all Wilds become spider-like machines which maintain the foetuses of the artificially grown humans. The Wilds will become sticky too and all will be removed when the Blue Harvester light appears on reel 3. The games end once you have accumulated 6 Wilds onto the reels. This means that once you have 4 or 5 Wilds you'll be hoping for the Blue Icon to remove them and perpetuate the spins!

The Matrix slot is perhaps the most effective film-based game Playtech have ever produced. You get some great animations, sounds and effects especially when you get any win involving the 3 character icons. It's good to be able to choose your free games and these, like the Deja Vous Wild feature seldom produce piddling and disappointing returns. You're never going to get insane 1000x bet hits on The Matrix with a maximum of 250x possible on any spin, but medium-sized wins are quite common on the base game reels to ensure your bankroll will be funding a decent session. The RTP isn't staggering at a mediocre 95.14% but this slot is really all about the gameplay and entertainment value. Escaping The Matrix is known to be nearly impossible, but I will certainly enter it again in the future...