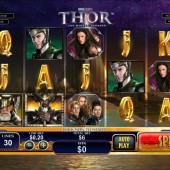 Joining the ranks of other Marvel-themed slots from Playtech such as Blade and Fantastic Four is a game based on the noble warrior Thor.

Since its release in 2012, other big releases like IGT’s Ghostbusters slot and Net Ent’s Elements came with lots of entertainment, but were ultimately low volatility.

However, Thor is different: it is superbly animated while at the same time being volatile enough to offer up some really big wins.

In fact, this game is based on the big-budget Hollywood film. Fans of Hollywood's comicbook adaptations are sure to lap this up.

Free Spins With the Bonus

There is a free spins bonus round in the Thor slot, which is triggered by getting the Gate Keeper symbol stacked on the middle reel.

This then takes you through to the Rainbow Bridge (if you have watched the film you should know what this is) and you will pick from two options either side of the Gate Keeper.

Unlimited Spins in the Bonus Features

On your first pick you will either go through to Jotunheim Free Games or Earth Free Games, with potentially unlimited spins available.

There is an array of features in both these bonuses which you can see in my video, they include frozen symbols, burning symbols and stacked wilds.

In both games you will return to the Gate Keeper if his symbol appears stacked on the middle reel. You then get another 50/50 choice which will either take you to another free game or will collect. In my experience the feature returns back to the Gate Keeper much more frequently after you have hit a decent win.

There are also two respin features; The Thunderstorm Re-spin and The Lightning Free Re-spin.

Both occur during the normal game and can offer some decent wins as extra wilds will either appear or be held in place. They can both occur on the same spin, but do not play out together, instead one after the other.

To give you an idea of what this feature is like, think about the Wildstorm random bonus in Microgaming’s Thunderstruck II and you are getting close.

Thor is a very welcome addition to Playtech's Marvel online slots arsenal and just shows what is achievable with a great theme and excellent animation.

Thor is also an addictive slot with some great wins possible, especially in the free spins bonus.

For those of you that may be thinking you have played Thor before, then you may be thinking of the Cryptologic Thor slot game. This is a different game and not as good in our opinion.