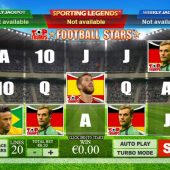 Top Trumps Football Stars slot is not a new concept from Playtech as these branded Top Trumps games have been around for years now, including Football Legends, Top Trumps Celebs and the original Football Stars 2014 edition. So in this fine footballing year when we see the World Cup being played in Russia, Playtech have kindly brought us up to date with the international stars of this era on the reels including Lionel Messi, Cristiano Ronaldo (of course!) and David De Gea. Don't bother looking for a star English players in this game though, as there aren't any. The TT series of slots always come with a few different features and are generally entertaining, but will you see the riches that come with tournament success or will your bankroll leave the competition quicker than an England squad?

We play with transparent reels over a background of the football pitch and packed stadium with the crowd urging us on to success as we spin. At the start you pick two teams from a small list to make up the colours for the match and any features that occur. Before we even get to the features and pays, there are 3 'Sporting Legends' progressives for which the picks round can be triggered after any spin. During play you can also change the 5 players that appear on the reels from a pool of 30 if you get fed up with Ronaldo's smug smile or Sergio Ramos's beard for example.

You pay 20 coins for 20 paying lines and all icons are singles. Wilds appear on all 5 reels and don't multiply and your players are the natural bigger pays awarding from 25 down to 10x bet for a 5-of-a-kind win while the five card values pay from 5 down to 2.5x. There is quite a frequent random feature called the 'Free Kick Respin' whereby a ball appears in front of the grid and is kicked onto a position which turns Wild and then either bounces into the net above the grid or misses. For each scoring kick a re-spin is awarded and this continues with any Wilds frozen in place until a kick misses, usually the third one.

Given the fact that like myself you probably played with those Top Trump cards as a child you'll be pleased to know they do appear in the features. If you see a bonus card land on both reels 1 and 5 you will be given a grid of 21 Top Trump cards to pick from which either award cash or cash+extra picks. If you hit 'Win All' you will be given the combined value of all the cards and quite decent return, otherwise the round is over when picks have run out.

The main bonus is really just an enhanced version of the Free Kick re-spins described above. You need three Top Trumps logos to land on reels 2, 3 and 4 to trigger this round which has unlimited free spins until a ball misses the net. At the start the ball will strike any play on the grid and turn him into a sticky Wild and get you 3 more spins. On any spin the ball may randomly appear again and turn another position/player Wild and award 2 or 3 more spins. This continues until the goal is missed and you'll always see the ball appear on your final spin to either miss or add another sticky Wild and more spins. Has some potential but results are generally mediocre (and I am not referring to you-know-who!)

Top Trumps Football Stars slot 2018 Edition is quite entertaining and the various features mean you don't tend to go too many spins without something happening bonus-wise. This means the game has low-medium volatility at best which may not suit some slotters, but that's the trade-off for regular entertainment on any game. It's difficult to get any bonus to pay over 50x bet so it's very unlikely you'll carry off Jules Rimet's gold here but I'm sure many of us are used to that at World Cup time. The RTP is a pretty poor 93.97% too but nevertheless your balance should keep you in the game for many a round so you won't have to experience a German telling you "For you ze tournament iz over"...