Ways of The Phoenix slot

Free Ways of The Phoenix slot

Ways of The Phoenix slot review 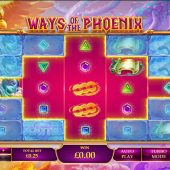 Ways of The Phoenix slot brings us a touch of the Orient which is very common of late from Playtech, following on from games such as Si Ling and Wu Long. Nothing wrong with that as the games tend to be colourful and good on the eye but as players we need something to excite us when playing and this slot seems to tick a few boxes on that score. The grid sits over a spectacular display of entwined dragon and phoenix with red reels and the obligatory Chinese pipes music as we spin to complete the scene. Will the Phoenix here be dead set on turning our bankroll to ashes though, or can we arise from them too?

On The Reels...
Ways of The Phoenix slot is absolutely certain to bring to mind Netent's Reel Rush or When Pigs Fly if you have seen either of those games. This is because the grid shows 5 reels of 5 rows each but you initially begin with just 45 ways and the rows set at 1-3-5-3-1. The mechanic is sightly different though as you achieve your bonus here with scatters as opposed to opening up the full rows with consecutive wins as you would on those two slots.

Symbols appear stacked and we pay 25-coins to play. The 5-of-a-kind awards range from 20x bet for the Red Phoenix, 12x Blue Dragon, 4x Drum, 3x Scroll or Tokens with 5 coloured gems all paying 60, 50 or 40 coins. Wilds appear on all reels in the form of a Golden Dragon Claw with grey scatters on all reels too. The mechanic is quite different as we'll see.

Rising Kingdoms
Having started at 45 ways, each win opens up some more rows on the reels up to a maximum of 5x5 which creates the best possible 3125-ways grid. Unlike the Netent games mentioned, you don't lose all your progress up the ways as soon as you get one losing spin, but just the last one created, thus you aren't playing the minimum ways too often. There is also an odd aspect to the scatters as they don't need to be on the 'live' positions but count anywhere on the 5x5 grid even if landing on a frozen position!

Free Games
So having landed 3 or more scatters you begin 8 free games, 20 for 4 scatters and 50 for 5. You will get 2 extra spins for any 2 scatters appearing in them and your grid at the beginning will be as it was when you triggered them. In free games your grid cannot reduce, only increase so you'll likely be playing most of the spins on the maximum 3125 ways. When free games end your base game spins will commence from the grid left at the end of the bonus round. There is some serious potential here if you can match stacks of 2 or more picture icons across all 5 reels in the bonus!

Our View...
While Ways of The Phoenix slot has clearly been inspired by the Netent games using a similar grid mechanic, I feel Playtech have somewhat improved things here. The RTP at 95.98% may be a fraction less but the free games trigger often enough and base game wins can pile up when it's in the right mood. The graphics, symbols and animations are very lively and colourful so it certainly isn't tedious to play and watch, especially as the grid doesn't stay the same for very long. Big free spins results may be rare but this doesn't detract in any way from Ways of The Phoenix slot at all. Like the legendary Phoenix, I'll be rising this Chinese challenge again sometime soon...