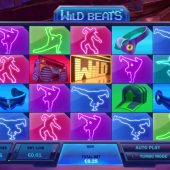 Wild Beats slot is is an absolute barrage of colour as you open the game which is clearly a 'yoof' project from Playtech centred around 'scratching' (DJ sound mixing) and street music culture. The reels are set against a cityscape at night as all the cool young things get up to their stuff accompanied by their genre of Beat Music as the reels spin. If you've played DJ Wild by Elk Studios you will probably recognise the symbology here, but can you beat Wild Beats or will it beat-up your balance?

We have an odd combination in that we only get 25 pay lines but Playtech have given us 5 reels of 4 rows, a format normally associated with 40-lines plus. There are standard Wilds on reels 1, 3 and 5 and like all the symbols they appear singly although it possible to get 2 in view on any given reel.

The best symbol is the Radio at 20x bet for 5-of-a-kind then we see Boots, Headphones, Shades and Baseball Cap paying 12, 8, 7 and 6x bet respectively for 5. We don't get card icons here but neon silhouettes of break dancing in various poses, but like card values Playtech actually do call them 'Royals' for a reason which will become apparent. There are 5 of them in different colours which pay from 1 to 3x bet for a full line.

There is no bonus game triggered on Wild Beats. Instead we get a special event as on reels 2 and 4 you get a special Wild in the form of two different dancing dudes which gives us Wild Beat's only feature, 'Dance It Out'. If they both appear all the Royal icons on the reels between them turn into Wilds. If on the same row this will only result in the one symbol between them, if a Royal, turning Wild. You need to get one on the top row and one on the bottom for the best effect as this will mean all Royals on the centre 3 reels will end up as Wilds, including the dudes themselves.

This now means it is possible to get the best pay of all, a 5-of-a-kind Wild win which could occur if the standard Wilds on reels 1, 3 and 5 have appeared, especially the outside 2. You could get a few full lines of Wilds possibly and that would have you dancing when you realize each one pays 200x bet!

Wild Beats slot is quite a rash of colour and made my eyes water after a while, but it would definitely appeal to some, as you cannot say the visuals are boring! The music is fine if you like that sort of thing, although to me it became rather repetetive very quickly, but again that is just taste and I'm probably getting too old. You get a bouncing 96.01% RTP and some decent wins when the special Wilds do land in the right place, but the annoyance is the frequent spins when the Wild appears on reel 2 and the game slows in anticipation of the second on reel 4 dropping in. For a low-tech slot it's quite good, but only due to the theme and nothing else, I won't be beating a path to this one...