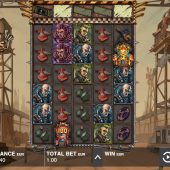 Mad Cars slot by Push Gaming you know will be another high-volatility game as theirs tend to be, incorporating some nice features. Famous for their Jammin' Jars 2 slot primarily and then their classic Razor Shark which was followed by the classy Shadow Order, Push Gaming rarely let us down. Here we have a railyard industrial landscape, grim and forbidding, with a post-apocalyptic fantasy theme and characters with doom-laden music to enjoy. So can we drive to a fortune here or will these cars crash along with our bankroll?

On the reels...
We start with 5 columns of 6 rows, 50 fixed pay lines and stacked symbols here on Mad Cars slot. The 5-of-a-kind pays are high with 100x for Orange Character, 50x Purple, 25x Blue and 20x Green with four object symbols like Steering Wheel, Spanner, Cone and Dice all paying 5x. You can get car Symbols with instant prizes of 1 to 100x bet land on any reel - these fall to the bottom and the revolving gate Boost Reel above the reel set can land blanks or numbers on any spin to move the car's position up the reel, paying its prize when it finally clears the top row. Unless another car clears the top at exactly the same time, any other cars disappear after one has been paid. The scatter car symbol also uses this method to trigger the bonus.

Boost Reel (Base Game)
As said, this reel has 5 windows over each game reel. They can be blank or reveal symbols which affect any car stuck on the reel below:
Multiplier - multiplies the car's value by 2 to 100x
Gas - moves the car 1-6 rows upwards
Multiplier/Gas - combination of the two above
Survivor - a lock which means the symbol below won't disappear as normal when another car reaches the top

Free Games
When the scatter car symbol gets to the top, 7 free spins are yours. Now you can only get a car on the bottom of every reel and the Boost Reel controls all the cars' progress. When one car reaches the top, it's paid, then it will be replaced on the bottom and you will get +1 spin. Now your Boost Reel contains some enhanced symbols as well as those listed above:
Line Up - all other cars will rise to the row of the car on the reel Line Up lands over
Persistent Payer - adds value to the other car symbols for that spin or any that follow while it remains in view
Persistent Collector - collects all the car values on the reels and adds them to itself, repeating this until it goes off the top when the collected amount will be paid
Persistent Collector/Payer - the above two combined
Mad Race Random Feature - this is a random event that might happen after the free games have finished and simply means all the cars left on the grid will race to the top and award their values.

Our View...
Mad Cars slot has a 96.39% RTP and clearly is inspired by the Relax Gaming Money Train 2 mechanic! You can win up to 25,000x bet which is half of what that game could pay though. It's a grim looking game but nevertheless entertaining enough in the base with bit wins possible not only on the reels but with the cars during play. The real potential lies within the feature though which surprisingly doesn't take too long to trigger once the Bonus Car has landed somewhere and starts to make its way up the reel. The bonus usually lasts quite a while which is great for entertainment value even if it's not paid that much at its conclusion. I can see many slot players getting mad about these cars in both senses of the word...