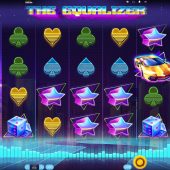 The Equalizer slot by Red Tiger doesn't have a theme based on the classic Edward Woodward TV thriller series as the title may suggest, but in this case the reference is to a graphic equalizer which you may find on a sound system. You have the graphic equalizer's LED bars moving around at the bottom of the grid of futuristic neon symbols with a city at night behind the reels and naturally some dance music for your soundtrack. If you have seen Stake Logic's Hardwell and Red Tiger's very own Laser Fruit, combine those games and you've pretty much got the idea of The Equalizer. So will this game dance to the tune of our bankroll, or will it be a case of dead beats here?

We begin with 5 reels of 4 rows each on The Equalizer slot although this can change, but for now we get 60 fixed pay lines. Symbols appear stacked with Cars paying 25x for 7-of-a-kind, Diamonds 15x, Dice 12x, Bars 10x, Stars 8x with four card suits all at 4x. You do see Wilds occasionally which can be stacked and they can also expand, although that's via a random modifier which if you're wondering, is why I have told the pays for 7OAK on a 5-reel slot! Scatters appear on all reels but we really need to examine the random modifiers before getting that far.

You may see the Equalizer ramp up the sound and direct it along the right side and top of the reels. When it does, you get the grid expanded to a maximum of 7 reels and 6 rows. You still get 60 lines, but now you may see 6 or even 7OAK wins.

When Wilds appear on any amount of reels, the Equalizer might also send sound to energize them and any in view will then expand. This can be very helpful in the main bonus as we'll discover right now.

If you land 3 or more Speaker Scatters in view, then 10 free games are earned. There won't be a retrigger as such, but a +1 symbol can now appear on the reels for an extra spin. Any reel expansions or Wild reels earned via those two modifiers above will remain sticky until the free spins end. You also get an extra modifier here too, the speakers may blast some Wilds on to the grid which roam between each end depending on which direction the sound waves blast them, as with Netent's wandering Wild slots like Jack and the Beanstalk. There is the potential for 10,000x bet in the bonus according to the splash screen so this round can be very rewarding with even a fraction of that.

The Equalizer slot is certainly eye-catching and looks very good, and the animations do too along with the soundtrack which may appeal to those liking a good bit of dance or trance music. Random modifiers appear frequently in the base game although good wins are rare unless getting the expanding grid. Free games aren't easy to get, perhaps due to the potential yield they have and I'd say the bonus forms a significant proportion of the slot's 96.08% rtp. As long as the game actually is an equalizer for your bankroll and not a leveller, you could well be dancing your way back from a visit here...