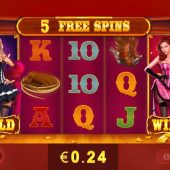 Red Tiger Gaming's Wild Wild Chest slot doesn't leave one guessing as to the theme, as it's sounds quite like Netent's Wild Wild West by title and the icons are pretty much the same as on NetEnt's Dead or Alive game too, although here depicted a bit more brightly. The reels are set on the verandah of a saloon bar with golds coins and bottles of Scotch scattered about and we get the twangy guitar music you would associate with this place in history. So will you find you chest filled with riches when returning from this Gold Rush?

We get 20 pay lines over 5 reels of 3 rows each with all symbols appearing either singly or stacked double or triple. The crossed Pistols award 16x bet for a 5-of-a-kind win followed by the Stetsons at 10x, Boots at 8x and Gloves at 6x for the 5. We naturally have card values present for the prospectors to gamble their gold on Poker games with, awarding 2 to 4x bet for all 5 on a line. The Wilds are the faces of various scantily-clad girls from the Madam's house of ill repute and appear singly paying a whopping 50x bet if you're lucky enough to score with all 5 of them on a pay line.

In-play we don't get the usual Red Tiger random triggers but instead there are Chests which can land on the reels during any spin, one or possibly more. You click the chest to collect your reward, or possibly 2 if you see another on the same spin. You will be treated to one or more of these 4 events and we are told that 2000x bet is possible!

Lucky Re-spin - This re-spins the reels for a hopefully improved situation. If you have another chest in view when this occurs, it will remain in place.

Random Tiles -  a random symbol appears from the chest and land in several positions on the reels to create possibly big wins.

Swap Reels - the reels will swap positions to find a better or the best possible combination.

If you are fortunate enough to see the Golden Sheriff's Star appear on reels 1, 3 and 5 you enter a free games round. You will get a random number of spins usually 8 or more and there is a rather eye-catching enhancement - the Madam's Girls become stacked and instead of their faces only we are treated to a full body length image of them in full basque and suspenders glory! If any part of them appears in view they will nudge up or down to fully fill the reel, similar to expanding Wilds in other games. Land all 5 and a delightful 1000x stake will be banked in your chest.

Wild Wild Chest slot is hugely entertaining, I found the time flew by when testing the game. The sounds may be a bit thematic and corny but the chests land regularly and seldom award disappointing outcomes, even the cash amounts were at least in double figures times bet every time. The free games have potential with the expanding Wilds to pay hundreds times bet too and along with a decent 95.30% RTP make for a fun session. With saddle bags loaded, pistols holstered and Stetson on I'm hittin' the trail...