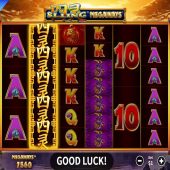 Si Ling Megaways slot by Skywind is their sixth Megaways game. As with Alive! Megaways you get a ‘Play it Your Way’ gamble option but before the free games rather than afterwards, we'll get to that soon. It's an oriental theme as with many of this developer's games aimed at the Asian markets and runs smoothly with nice graphics, symbols and animations to accompany the gentle Chinese music we hear. It's based on a standard slot of the same name made 6 years previous and like all their Megaways since, it's better than the first one, Book of Gems Megaways and another basic one they did, Sticky Sevens Megaways. So can Si Ling make our bankroll sing here or will it be a case of Si nothing?

On the reels...
You get a randomly chosen super stacked symbol every spin in the base game of Si Ling Megaways slot. This can be anything at all, the Bronze, Silver or Gold scatters, Wild or any standard pay tile. There's no top scrolling reel of 4 tiles on Si Ling Megaways so 2-7 rows per each of the six reels means 64-117649 ways each play. All symbols plus the Wilds are stacked on all reels and Wilds are the best 6-of-a-kind pay at 1.4x bet, Red, Blue, Purple and Green animals pay 1.25 down to 0.5x and the car values 0.4 down to 0.2x There's no tumbles of replacement symbols after wins here, the 3 types of scatters appear stacked too for the 3 levels of feature entry. No random modifiers so on to the interesting bonus rounds.

Free Spins
If you land 8+ of the Bronze, Silver or Gold metal scatters you get the Si Ling Choice, Mystery or Wild free spins respectively.
The Level 1 Bronze entry selects you one of the 4 top picture symbols but not Wild, then gives you a minimum of 8-15 spins depending on how high the symbol it picks, to a maximum of 25 spins. The Play it Your Way screen now appears so you can collect the feature, or gamble either the spin amount for +1 each time via a segmented wheel, or the symbol itself to upgrade it. If you reach the highest Red Dragon symbol in the basic Bronze entry no further gambles are possible on that wheel, same on the +1 spins wheel once 25 is reached.
The level 2 Silver entry is the same as Bronze except it can now also award randomly another result of 3-25 spins with the Wild selected as the super-stacked symbol. If not, your symbol gamble wheel can now let you get to the Wild. The other +_1 spins wheel is the same as above too.
The Level 3 Gold spins won't show a symbol gamble wheel as you get the super-stacked Wild selected as default, so you only see the +1 spin gamble wheel to tempt you to improve on the 3-25 spins initially awarded.
All levels can retrigger with 8 or more of their scatter and give the same amount of spins you began with. The maximum pay here is limited to 200,000x coin value, or 10,000x total stake if you like. The 3 levels of bonus on Si Ling Megaways can be purchased in some jurisdictions for 75, 125 and 250x bet respectively.

Our View...
Si Ling Megaways slot has a 96% RTP and is really eye-catching to play with smooth running and nice colours. Your low symbol pays are compensated for by way of the super-stacked symbols each spin so it's not unusual to get big wins from say 192 ways of 5OAK 10's for example. The free games will normally be the Bronze trigger which limits their potential even if you are brave enough to gamble to maximum 25 spins. The super-stacked Wild spins off of the Level 3 Gold trigger or gambled to from the Silver trigger are really where you want to be, and it is risky gambling for them! Get them along with a few good 6OAK combinations in the bonus, you could be counting thousands times bet but it's rare. I like the game though, so won't be saying 'so long' to Si Ling quite yet...