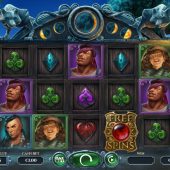 Blood Moon Wilds slot by Yggdrasil has a Gothic grimoire theme in the same mould as Immortal Romance and numerous other classics which take the player over to the dark side. The wooden reels sit over the archetypal night time scene of a remote mansion in the fog with gargoyles around the grid and spooky music to compound the effect. So far so good, we have a game at least as good in appearance to Iron Dog's Blood Queen and in my view it's comparable to the superb graphics that Netent's Blood Suckers 2 slot offers. So will these wilds prove a bloodbath for our bankroll or will it be immersed in moonshine?

We have 20 pay lines over 5 reels of 3 rows on Blood Moon Wilds slot with single symbols. There's quite a lot to this game so we'll deal with the 5-of-a-kind pays first, which are characters as top pays and the Red one is 50x bet, Purple 30x, Green 20x, Blue 12x with four card suits paying 6.5 down to 3.5x for a full line of five. There are several random modifiers which we will view shortly but you will notice a Moon Meter above the reels. This has a Lunar Calendar of the Moon in its various phases and should a Full Moon land in the window, all top pay symbols in view i.e. the characters, will turn Wild.

You can get one of four types on any spin and this will be indicated by the two gargoyles either side of the Lunar Calendar turning red and springing to life!
Random Wilds - the character symbol in view which would award the highest possible win if turning Wild, will do so.
Random Full Moon - nudges the Lunar Calendar along to display the Full Moon and activate the characters symbols turning Wild.
Random Free Spin Symbols - an extra scatter is added to the grid.
Random Multiplier - a 2,3,4 or 5x multiplier is applied to the spin.

You need 3 or more free spin scatters to trigger these. It's possible to get 6 as 5 can land with the random extra scatter. You get 7 free games for 3, 10 for 4, 12 for 5 or extremely rarely 20 for all 6. You still get the random modifiers and you also get an enhancement. The Lunar Calendar will now have red Blood Full Moons on it and should these land in the window you'll get the character symbols turning Wild as in the base game but now they will also become Wild on the reels for the duration of the bonus, so effectively giving extra Wilds to the reel strips. You can retrigger them in the same way as the trigger but now just getting 2 scatters will award 2 extra spins.

Blood Moon Wilds slot looks very good and is as classy in terms of graphics, sounds and animations that this theme requires to look complete and credible. The RTP is 96.20% which is standard for Yggdrasil and the random modifiers occur enough in the base game to keep you interested and more importantly, to maintain your balance. It's not a hugely volatile game although we are told 2,000x is possible in the feature which can be hard to land. The free games though are unpredictable with often disappointing amounts in the 10-30x range as the character symbols seem to disappear from the reels, but when those modifiers are activated you can win quite well. I'd say go stand in the moonlight here, you won't shed too much blood...