Legend of The Golden Monkey slot 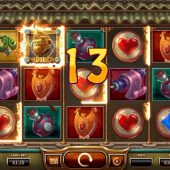 Legend Of The Golden Monkey slot is based on the original Monkey King by Yggdrasil. The graphics are improved and the karate-chopping Monkey has a nice repertoire of Bruce Lee style 'whoaaars' and other noises to boot! As well as the Monkey we have Oriental artifacts and card suit symbols making up the rest of the graphics on this 243-way game.

The base game has Wilds on reels 2, 3 and 4 all in the the form of the Monkey. On reel 3 they are 'countdown' Wilds which will remain for at least 3 spins until they they disappear. On reels 2 and 4 they are sticky Wilds but with a difference - they remain until you stop winning. This can be for many spins because Legend Of The Golden Monkey slot pays not only 243-ways, but from right-to-left too!

There is a Treasure Chest on reel 5 which will award up to 1000 coins or even trigger the free games round, which we also saw on Yggdrasil's Vikings Go Berserk slot. The Monkey does the rest though - he can perform many tricks when he randomly appears during any spin and performs his karate routine and then bashes a position on the reels. This one symbol can make quite a difference: it may link up symbols to create a win, add a sticky Wild or a countdown Wild and add the third scatter when only two appear!

3 scatters which appear anywhere on all reels will trigger the free games. You cannot retrigger any of them but have a choice of three Wild options:

2. 8 Free games with sticky Wilds on reels 2 and 4 which remain in position regardless of winning with them unlike the base game. There is also a non-sticking stacked Wild on reel 3 which may land.

3. 10 free games with a starting sticky Wild in the centre of reel 3, and sticky wilds as normal on reels 2 and 4 which remain sticky again regardless of forming a win.

There is a trend at the moment with slots developers rehashing older games. Yggdrasil aren't usually one, so we'll forgive them - just this once! Legend Of The Golden Monkey slot does look better and has crisp graphics and with the 'sticky until lose' Wilds in the base game, you can often get long winning runs going. A creditable 96.0% RTP and guaranteed free games (no silly bonus wheel with cash amounts here!) plus the option of Wilds in them makes it quite fun, with some potential too. Will you be gibbon it a try?......