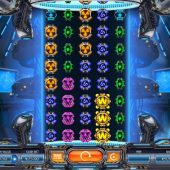 Power Plant slot is a departure from the standard slot format as we will shortly see, but the theme is not unfamiliar. We have the game set in a space-age power induction machine with a futuristic look and the reels sit between conductors on either side that will produce huge bolts of electricity between them when a win appears. The sounds aren't quite as good as the visuals though with the game underscored by a rather tedious piece of soft 'Techno' music only broken by the bleeps and noises of the reels spinning and stopping. So will Power Plant light the spark in you?

On the super reels...
As said we depart from the standard 5-reel and 3-row format for this game by having super reels of 8 rows featuring stacked symbols on all. Due to this fact they are smaller than usual slots in order to fit them onto mobile devices so the reels only take up about a third of the area covered by the slot if you play on PC or Laptop. This doesn't detract from the crisp clear graphics though as we play Power Plant's rather odd 82 pay lines which we stake 50 coins for! The game may well remind you of the second reel set in WMS's 'Colossal Reels' slots like KISS, Spartacus and Zeus 1000.

There are stacked Wilds appearing on all 5 reels which can fill all 8 rows as with all the other icons. These are the top pay at 8x stake for a 5-of-a-kind win, followed by the radioactive symbol at 4x, the flame at 3x down to the lowest of the symbols, the green leaf at 1x bet. There are only 6 symbols aside from the Wild which is another unusual facet of the slot.

Wild respin
There is no free spins bonus but we do get a repsin with various enhancements when any 1 or more stacked Wilds land fully in view, i.e. fill any column completely. You have 4 possible enhancements, of which you get 2 for one Wild reel, 3 for 2 Wild reels and 4 for 3 or more Wild reels. You will get a rotating band which will select these for you as they stop over an pointer underneath.

3-8 extra winning symbols are added to increase the amount of winning lines.

A nudge of up to 4 positions up or down will automatically create the best possible win by moving a reel.

Extra Wild symbol which selects a substitute symbol to act as a Wild too.

Super-stacked symbol is chosen and it becomes far higher than the usual 8-rows high on the reels.

Extra Feature (+1) means if you get this you will have 3 features in play for the respin as opposed to the 2 you would have for example when getting just one stacked Wild reel to trigger it.

There is only 1 respin, even if more stacked Wilds appear during it. The top award is 656x bet for a full grid of Wild/substitute Wilds.

Our View...
Power Plant slot tries to be innovative but the feature in this game really lets it down. It is all over very fast with just the one respin allowed - which is not very inspiring. This feature is where you'll get most of the game's 96.10% RTP because the base game pays for 3-of-a-kinds are quite dreadful, for example 1/25th of your bet for the 3 lowest icons. This is the price we pay for having stacked symbols and so many pay lines - very low volatility in the base game and a relatively low maximum win possible. Endless runs of dead spins punctuated by tiny wins while waiting for a stacked Wild does not a fun slot make! This Power Plant certainly struggled to get me powered up...