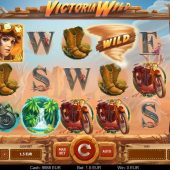 Victoria Wild slot by Yggdrasil via one of their partner studios, Trueflip, is certainly a game that will entertain all the way. You get the traditional 'explorer' theme like Novomatic's Book of Ra Deluxe or more recently Play'n Go's Rich Wilde series including Book of Dead. Pragmatic Play have weighed in too with their John Hunter series and slots like Book of Tut. I can say gladly that here though we don't get the tired old mechanic of those games but something a bit more refreshing with the reels over a dusty desert ruin, dramatic music and gunshots when we spin. So will it be Victoria plum for our bankroll or wild despair here?

There are 15 lines on Victoria Wild slot and single symbols. There are both 5 and 6-of-a-kind awards possible here for reasons that will become apparent but to give an idea the Wild pays 120x for 6 and 24x for 5OAK, the same as our motorbike-riding Victoria. Medium pays are the Bike or Pistol at 45/9x for 6 or 5 respectively, Flask or Boots 30/6x with the low symbols being compass directions of N,E,S and W at 15/3x. There are other symbols too including Red Temples and Oasis which both appear on all reels.

When you see two or more Tornado Wilds you will activate Sandstorm spins with a moving Wild on the grid for 5 to 15 spins, paid. Should this collide with another one landing on its position, you get re-spins with any Wilds becoming sticky until no further ones are added, each win along the way added to the total for the re-spins which again are all paid for at your set stake.

Every time an Oasis symbol lands, you will add a position on a 25-piece trail with the Oasis at the end. This will eventually trigger you 10 free spins over 6 reels. Wilds now only appear on reels 2,3,4 and 5 and will expand fully when they appear. There are no extra spins or retriggers.

You get 8 to 15 Temple Free games for 3 to 6 scatters (you can trigger them in the Oasis 6-reel spins) and again these are played on 6 reels with no extra spins or retriggers. Your Wilds are now Lamps and collect 7 or more during these spins and you will open the Treasury Feature up afterwards. This is a wheel which multiplies your free spins total by 2,5,10,15 or even 25x or more likely will award a coin value of 250 to 2500 coins, the top figure being 167x bet.

Victoria Wild slot has a good 96.55% RTP, looks and sounds fine with decent animations too. You'll find the game entertaining but this fun is paid for with the lack of potential as whatever features you get, you'll always seem to end up with 30-60x bet as the outcome although theoretically the game could pay thousands times stake. Nevertheless, it's a slot which holds the attention and there aren't too many spins with nothing going on plus you could end up with one of the rarer 3-figure pays. I wouldn't say I'm wild about our Victoria, but there's worse dates to go on in slotting...