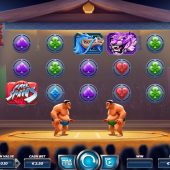 Yokozuna Clash slot by Yggdrasil Gaming takes in to the heavyweight world of Japanese Sumo, in which the Yokozuna is the top-ranked warrior in this fine tradition. The clash in the title tells us it has some kind of battle impending and you won't be disappointed there. Sumo or battle slots aren't anything revolutionary in themselves, we've just recently had Netent's Wild Worlds battle slot for starters and Japanese combat is an oft-used subject as Yggdrasil gave us Hanzo's Dojo before this slot appeared. Perhaps Novomatic's Katana is the most commonly known game of the genre though. Here we have transparent reels lying over the wrestling arena with two combatants squaring up under the reels to the sound of battle drumming, so will our bankroll be heavy enough to stay within the circle or will it be pushed out and lost?

We have a 243-way format here so have no fixed pay lines and get 5 reels of 3 rows each on Yokozuna Clash slot that pay both ways. Symbols can appear stacked so you can probably figure the 5-of-a-kind pays aren't going to be anything substantial. Your Wild or Red Bird pay 12x the 25-coin bet, Purple Tiger 10x, Green Lizard 8x, Blue Dragon 6x with four card suits all paying 0.8x for a full way of 5. A free spins scatter only appears on the outside reels 1 and 5 but our Sumo Yokozunas do have a couple of modifiers rising up to the reels as they do battle each spin.

Your distinctive red Free Spins scatter lands on reels 1 and 5 to trigger unlimited free spins. A meter appears between the two fighters of which you have chosen one. There are 7 positions on the meter and you lose life when a right-to-left win occurs and push the opponent back when a left-to-right win happens. Each win for you gains one of the 7 lives but opponents take 2 lives when they score. You still get the modifiers as described above in this first round but now 1-3 Wilds or 2-4 multiplier.

If you win this round the meter is reset and round 2, the semi-final, starts. The modifiers remain the same as round 1 but the opponent wins do 3 steps on the meter as opposed to 2 in the first round and thus it's harder to beat him. If you're lucky, you'll meet the Boss Yokozuna in the grand final.

Yokozuna adds both 2 to 4 random wilds and a 2 to 4x multiplier each time but the pitfall is that he has 4-Power for every time a win lands his side, so to keep these profitable spins going you need to be quite lucky!

Yokozuna Clash slot is certainly an entertaining game with regular modifiers in the base game and some great sounds effects, with good animations. The Tournament Free Spins are fun but quite often end in the first round with wins in the 10-30x bet range as you won't get those bigger returns until at least the latter spins of the semi-final or more rarely, the final showdown with Yokozuna himself. Base game wins are seldom big though but we do get the usual Yggdrasil 96.30% RTP and medium volatility at best, or worst depending how you look at it! Go and have a session with Yokozuna Clash and you could well make some Yokozuna cash (sorry!) but even if you don't it's great fun...