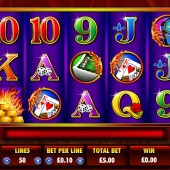 Money Heat is an online slot from the underrated developer Ainsworth that has snuck under the radar and been released online with little more than a whisper to let slots players know about its launch.

This is a 5 reel, 50 pay-line slot with a theme based on money and fire. It has a similar feel to Ainsworth’s other slot release Dragon Lines but there are some stark differences asides from the theme. However, the layout and design of the reels appear to be in a template format for Ainsworth slots.

The Symbols (Generally in a Gold Ring of Fire!)

Hit the Money Heat to Win at Least 10 Free Spins

There's a 5x Multiplier Up For Grabs!

Money Heat is not one of the most outstanding slots I’ve played recently and to be honest it is easy to see how it used to be a decent land-based slot. It does feel a bit behind the times though. Ainsworth could have been more creative and added a bonus feature to evolve it slightly for the online market but they’ve almost made a complete transition from its land-based predecessor and, for me, it falls a bit short.