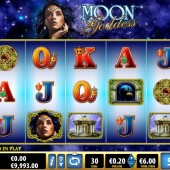 Las Vegas-based online and land-based slot developer Bally Technologies have long been a big name on the casino floors but only recently have they begun their adventure into the online slots genre. I must admit, I've found the online conversions of their land-based slots very hit and miss so far. On the downside, they released a very dull China River slot which almost bore me to sleep when I was playing it. However, on the upside, there was the release of the riveting Thunderhorn slot which was Bally at their best.

Moon Goddess is another land-based slot that gained a fan following in casinos across the world and has now been readied for its online release. I never had the fortune of playing the land-based version but from what I have seen, this online conversion has stayed very true to its land-based roots.

This 5 reel, 30 payline slots has a Greek mythology theme with symbols across the reels including a temple, planets aligning, a moon, a golden broach, a silver broach, and the standard Jack-through-to-Ace symbols.

The Moon Goddess herself acts as the Wild. This symbol not only substitutes for all other symbols, except for the Scatters, to complete winning combinations but it also plays as an Expanding Wild on the reels.

Shoot the Moon to Earn up to 15 Free Spins

The Scatters are represented by the moon symbols and you must hit three of these across the reels to trigger the Wheel Bonus feature. Sadly, there are only three of them available on the reels and they can be found on reels 2, 3, and 4. The amount of times I hit two moons and fell short of the third is unreal. It is as if the game was keen to tease me beyond my own tolerance. Anyway, once triggered, the wheel will decide whether you will be rewarded with a cash prize or free spins with up to 15 free spins up for grabs. Predictably, there is not the chance to re-trigger your free spins.

There are some pros and cons to this Moon Goddess slot. I found it frustrating because I played for hours before I even triggered the bonus feature and even when I triggered it I found it was not worth the wait to be honest. However, the Expanding Wilds and regular symbols, particularly if you hit 5 of a kind, on this slot play more of an important role on this slot than you would expect on other slots. Unfortunately, I think Bally need to try a bit harder than this. There are some nice aspects to this slot but it amounts to nothing more than an average slot that at its worst is intolerable and at its best mediocre.