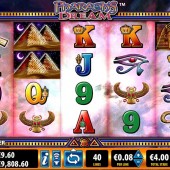 What did the Pharaohs actually dream about? How could you possibly top waking up every morning surrounded by concubines, being bathed in goat's milk, slipping on a robe and wandering outside to gaze upon yet another extension to your latest pyramid (nothing too fancy, perhaps just a summerhouse this time or a playroom for the kids)?

Slots developers have certainly dreamt of riches themselves over the years. Whether it's the 9 pay-line Egyptian-themed Book of Ra from Novomatic, its far cooler younger brother, the 10 pay-line 'Deluxe' version, or Microgaming's fun take on the theme, Crocodopolis, there's no shortage of titles for even the most Thebes-weary slots fan. So you might as well grab your sandals, get your Joseph and the Technicolor Dreamcoat DVD out and get ready for a fiesta of Egyptian-themed slots madness! Don't worry, we don't have to argue over whether it's all about Jason Donovan or Donny Osmond!

What Is It All About?

Formerly a land-based favorite, this Bally Technologies release Pharaoh's Dream is a 5 reel, 40 payline slot that has the same attractive graphics as its brick 'n' mortar cousin: ankhs, Sphinxes, scarab beetles, the Eye of Horus, and the usual 9-through-Ace symbols, familiar to most slots.

The Pyramids of Giza symbol plays as the game's Wild. It substitutes for all symbols other than the scattered Sphinx. Get three Sphinx scatters across reels 1, 3 and 5, and you'll trigger the free spins bonus game. 10 free games are awarded, together with a 4x multiplier, so bagging those Sphinxes can really pay. Better, the pyramids are stacked on reels 2, 3, 4 and 5 during the free spins, giving you more chances to win. Get pyramids down a full reel and a burst of supernatural energy shoots out of the pyramid. With it, the Wild substitutes for all symbols.

Pharaoh's Dream may be a popular land-based slot, but for its online version, I was expecting a little more in the way of graphics and sound. I don't think it's too much to ask for some nice music to accompany a slot with such an exotic theme. The symbols are pleasant enough, but there's not much in the way of exciting animation, certainly not if you're used to slots by 3D slot developer Sheriff Gaming or innovative slot developer Betsoft Gaming. However, old-school fans who like free spins with their games will find enough to enjoy here. Book of Ra this ain't!