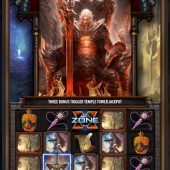 Sword of Destiny slot is part of a generation of HTML5 slots catering for large screen mobile devices as we can see by the elongated vertical design which you may also have noticed in recent Blueprint Gaming slots such as Thundercats and Pegasus Rising. The idea is presumably to emulate the look and feel of a land-based slot machine cabinet in your hand. This leaves the top section above the reels open for some nice graphics and animations plus of course expanding reels which we get too on occasion. The theme is fantasy adventure and as is usual buxom heroines feature prominently in various types of battledress to take on the fight against evil, accompanied by an excellent dramatic musical score and symbol animations. So full marks for the sounds and appearance of Sword of Destiny, but it's the destiny of my bankroll here that concerns me more!

The main reels are a straightforward 5x3 set-up with 25 paying lines although we pay 40 coins per play to cover the frequent in-play and often good random features, it has to be said. The top icon is the single Wild which pays the same as the top pay, a 2-row stacked Evil Knight at 12.5 x bet. Sword Man will award 5x, Sword Lady 2.5x and the remaining pays are 1.5, 1 or 0.5x bet for 5-of-a-kinds of Castle, Flask, Golden Gauntlet, Scroll and Necklace.

You have 4 separate random events which can occur at the start of any spin too, and that's before we get on to the bonus rounds!

Clumped Wilds - this is basically what you'd know as a stacked Wild or Wild Reel and like the Wildstorm on Thunderstruck 2 you get reels made Wild, but only 1 to 3 in this case, but some large pays can occur.

Random Wilds - 4 to 9 single Wilds thrown onto the grid in any positions.

Symbol Upgrade - 2 or more of Flask, Necklace, Scroll and Golden Gauntlet will be be replaced with either castle, Sword Man or Sword Lady after the spin stops.

If you see an Orange Orb overlaying a symbol on reels 1, 3 and 5 at once you are taken to a pick-me game. The jackpot is not progressive but can award 625x bet for the top rung of the ladder you will see on the right of the animation. You have 16 rungs to climb and pick a pot to break which releases 5 coins of which you pick 1 and get a number of moves up the cash ladder. You have 3 tries at this, if you think of the Leprechaun Trail in Rainbow Riches then you get the idea. The top 3 rungs have large 'jackpot' amounts and then 50x bet and so-on down to the bottom rungs with 20 and 40 coins on them. You may have guessed you'll usually be fobbed off with 10x bet or less.

If you see 3 'X-ZONE' scatters on the centre 3 reels then 8 free games are won. These cannot be retriggered but you do get an extar spin for each scatter during them. Now the game also has the Wild removed from reel 1 but a multiplier column now fills the space above the reels, starting off with 2x or 3x by a column of all possible symbols. As you get a win of that symbol, another multiplier cascades down from above and after a few wins 5x will appear in the column at the top and work its way down each time a win occurs and eliminates one. This means the extra spins and frequent wins are crucial in order to eradicate the lower 2x and 3x multipliers you begin with and fill the column with 5x and hopefully 10x multipliers!

Sword of Destiny slot is quite superb for sounds, effects and animations so Bally/Scientific Gaming have upped their game here for certain! The RTP is 95.94% so quite good and you won't go many spins without the spectacular random features which to be honest are responsible for nearly all the better pays as the reels wins tend to be minor at best. You have an unlikely chance on the jackpot ladder feature of a big hit but the free spins construct is great fun to watch and usually full of action. This is one of the few games which actually had me forgetting I was supposed to be winning and focusing more on the visual fun to be had. If the destiny of online slotting is to see more graphics and effects like this, then I'm all for it...